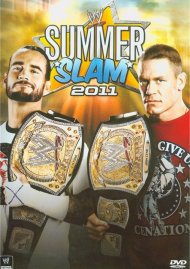 It's the biggest event of the Summer, and it continues to shine in Hollywood! The WWE Universe will be watching as the Superstars of World Wrestling Entertainment bring SummerSlam to the Staples Center. Last year's show saw WWE and World Heavyweight Championship Matches and a 7-on-7 battle pitting the best of Raw against the upstart Nexus. Who knows who the superstars of Raw and SmackDown will top themselves?