String Of Family Favorites, A (3 Pack) 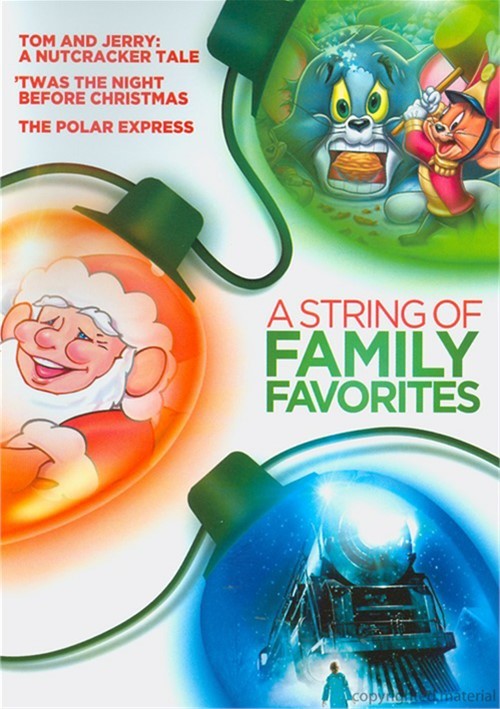 String Of Family Favorites, A (3 Pack)

Tom and Jerry: A Nutcracker Tale

In an empty opera house, Jerry wishes for a chance to perform and magically his dream comes true. The little mouse is whisked away to an enchanted kingdom where anything is possible: candy forests, singing snowflakes, even the toys spring to life! Jerry has a great time with his new friends and when Jerry dances with a music box ballerina, he is as happy as happy can be. Unfortunately, alley cats led by Tom crash Jerry's party, kidnap the music box ballerina and wreak havoc in the holiday kingdom. It's up to Jerry to set things right - and with help from a fellow mouse named Tuffy and more newfound friends, Jerry just might win the day!

'Twas The Night Before Christmas

For some unexplained reason, letters to Santa Claus are being returned to the children of Junctionville. It seems some resident has angered St. Nick by calling him "a fraudulent myth!" Skeptical Albert Mouse has to be brought to his senses. How Albert is persuaded to change his tune paves the way for Santa's jolly return to town - and the joyous finale of the animated fable inspired by Clement Moore's poem and produced by the merrymaking conjurers of Rankin/Bass Studios.

It's Christmas Eve, and you're about to roller-coaster up and down mountains, slip-slide over ice fields, teeter across mile-high bridges and be served hot chocolate by singing waiters more astonishing than any you can imagine. Tom Hanks stars in and Robert Zemeckis directs this instant holiday classic filmed in dazzling performance-capture animation that makes every moment magical. "Seeing is believing," says a mysterious hobo who rides the rails with you. You'll see wonders. And you'll believe. All Abooooooard!

'Twas The Night Before Christmas
Christmas: A Global Holiday

Review "String Of Family Favorites, A "

Reviews for "String Of Family Favorites, A "