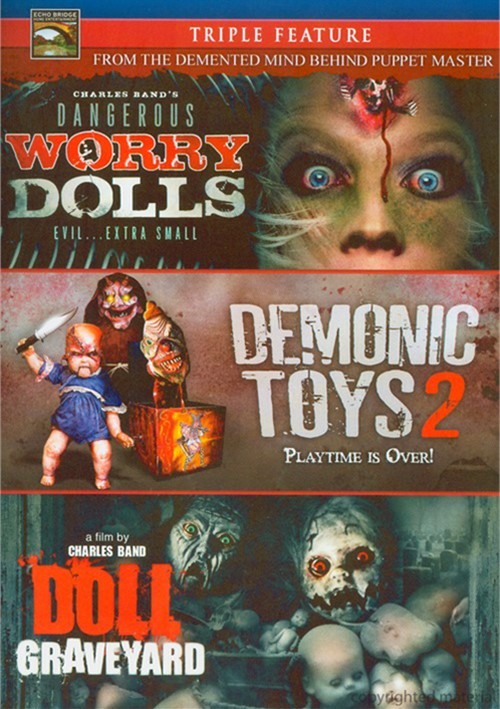 Serving time for a minor offense in a brutal women's detention center, Eva (Jessica Morris, TVs One Life to Live) finds herself at the mercy of the evil matron, a sadistic guard and a gang led by the vicious Kim. With all hope lost, Eva makes a midnight wish to a set of tiny South American Worry Dolls her daughter shares with her during a visit. The Dolls crawl in her ear at night and soon Eva becomes possessed with the dark powers she needs to exact wicked vengeance on her tormentors.

When an oddball group of characters - a college student, an eccentric collector and his crew, an antique toy expert (Leslie Jordan, TVs Will & Grace), and a little-person medium - gather at an Italian castle to inspect an ancient puppet, strange things begin to happen. The hideous, wooden puppet, Divoletto, comes to life... bringing with him Baby Oopsie-Daisy and Jack in the Box. Together the demonic trio terrorizes the group and the death count begins to rise.

In 1905, a young girl named Sophia (Hannah Marks, The Runaways) spent all her time playing with her handmade dolls. When her abusive father finally had enough, he f-rced her to bury them in the backyard. But, after she slipped into the grave, she was buried along with them.

One hundred years later, the Fillbrook family moves into the very same house. A teenage loner, Guy Fillbrook (Jared Kusnitz, Prom) finds the buried dolls, much to his delight. Like Sophia, Guy lacks friends and is constantly ridiculed. After Sophia's spirit possesses the dolls and brings them to life, the protect Gary from further harm. . .fighting a bloody battle in his name.