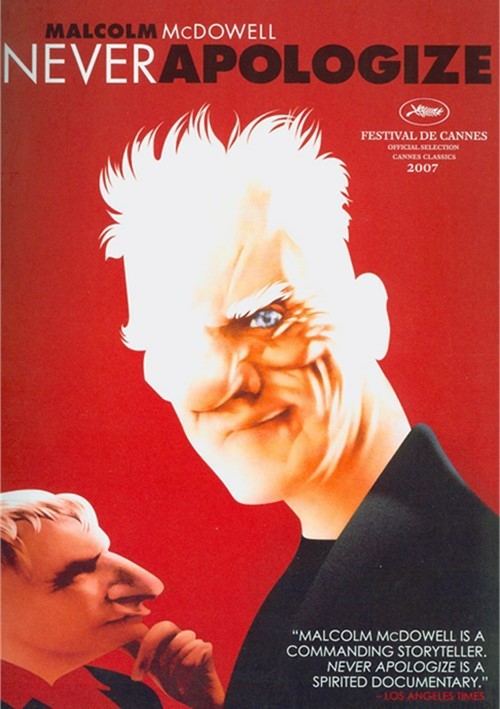 Never Apologize, the fascinating documentary of Malcom McDowell's celebration of Lindsay Anderson, one of the most significant f-rces in British culture, is a unique blend of film, theater and storytelling, as the legendary actor weaves a mesmerizing mosaic about his mentor, friend and director- and their illustrious colleagues. Alan Bates, Bette Davis, John Ford, John Gielgud, Lillian Gish, Richard Harris, Rachel Roberts and Laurence Olivier spring to life as we are privy to McDowell's hilarious, chilling and moving accounts, drawn from his memories and through writing by and about Anderson. Through Anderson's encounters and observations, we also get new insights about Princess Diana, the World Trade Center and an ingeniously defensive apology that is the title sequence.

A provocative critic, writer and Oscar-winning film maker, Anderson brought McDowell to international prominence when he cast him in his star-making role in IF...(Cannes, Palme D'Or). Five collaborations followed, including the epic comedy O Lucky Man! All of Anderson's feature films premiered in Cannes, bookended by his first, This Sporting Life, and concluding with The Whales of August, both Oscar-nominated. Never Apologize evolved from its original productions at the Edinburgh Festival and London's Nation Theatre. A wealth of archival material surrounds McDowell's performance, arguably his most compelling, inspired and wide-ranging since A Clockwork Orange. Direct by Mike Kaplan (Luck, Trust & Ketchup: Robert Altman in Carver Country), Never Apologize has become a genuine cinema experience, "a surprising coup that grips consistently for every one of its 111 Minutes" (David Robinson, Sight & Sound).