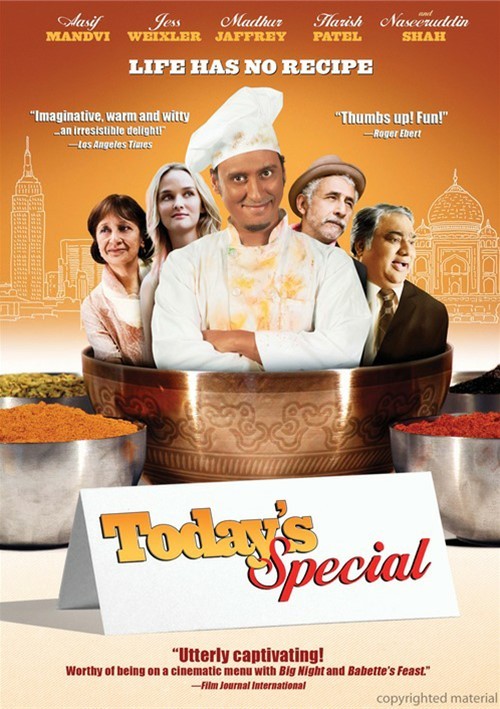 Life has no recipe

Today's Special, a heartwarming comedy with culinary flavor, tells the story of Samir (Aasif Mandvi, The Daily Show with Jon Stewart, The Proposal), a sous chef who dreams of becoming the head chef at an upscale Manhattan restaurant. When he is passed over for a promotion, he impulsively quits and tells his co-worker Carrie (Jess Weixler, Teeth) that he intends to go to Paris and apprentice under a master French chef. But dreams must be put aside after his estranged father, Hakim (Harish Patel, Run, Fat Boy, Run), has a heart attack and Samir is f-rced to take over Tandoori Palace, the nearly bankrupt family restaurant in Jackson Heights.

Samir's mother, Farrida (legendary cookbook writer Madhur Jaffrey), is consumed with trying to find a wife for her son, while Samir is trying to master Indian cooking to salvage the family business. Luckily, he crosses paths with Akbar (Naseeruddin Shah, Monsoon Wedding), a taxi driver, passionate chef and worldly raconteur. Akbar inspires Samir and teaches him to trust his senses more than recipes; to stop measuring his life, and to start truly living it. With Akbar's guidance, Samir has a chance to rediscover his heritage and his passion for life through the enchanting art of cooking Indian food.