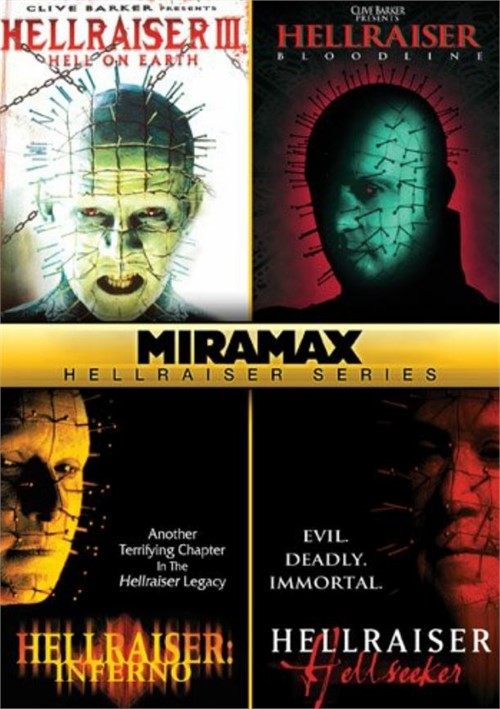 Some call him the Black Prince of Hell. Some call him the Angel of Suffering. To horror fans everywhere, he's Pinhead (Doug Bradley), the urbane, spike-faced minion of evil with a bloodlust for human souls. Now Pinhead returns in the most diabolical Hellraiser of them all - Hellraiser III: Hell On Earth! TV reporter Joey Summerskill (Terry Farrell, Back To School) is on assignment at a local hospital when a bloodied teenaged boy is rushed into the emergency room. As Joey watches, the writhing boy is literally torn apart by chains impaling his body. Fleeing the carnage, Joey follows the victim's girlfriend to a downtown nightclub, the Boiler Room. In the apartment above the Boiler Room rests the owner's newly purchased sculpture: a pillar etched with distorted figures and faces. Among the frozen images is Pinhead. Tonight he shall be released!

Pinhead is back - And this time, he's out for more blood...in the fourth terrifying chapter of the wildly popular Hellraiser series! Spanning three generations, this horrifying story chronicles the struggle of one family who unknowingly created the puzzle box that opened the doors of Hell - setting the diabolical Pinhead free to spread evil here on earth! Now, the family must fight to slam those doors shut again...but not before Pinhead wages one of his fiercest and most frightening battles ever!

A spine-tingling thriller, Hellraiser: Inferno is the next inescapable terrifying chapter in the heart-stopping Hellraiser series! It's the powerful story of a shady L.A, detective (Craig Sheffer - The Program, A River Runs Through It) who finds himself lost in a darkly nightmarish world of evil when he solved the mysterious puzzle box that releases the diabolical demon, Pinhead! As those around him begin to meet tragic fates, he sets out to conquer the horrifying Pinhead and escape eternal hell! Also starring popular Nicholas Turturro (TV's NYPD Blue, Excess Baggage, Hellraiser: Inferno combines great special effects and relentless thrills to deliver exciting, edge-of-your-seat entertainment!

Pinhead is back in Hellraiser: Hellseeker - the next chilling chapter in the electrifying Hellraiser legacy originated by frightmaster Clive Barker!

When the puzzle box is once again solved, the devastating demon Pinhead (Doug Bradley) and his legion return to unleash Hell on Earth and demolish all who dare oppose them! But standing in his way is Kirsty Cotton (Ashley Laurence - Hellraiser I, II, III) - the only person who had defeated Pinhead in the past - and it's up to her to save the world from this ultimate evil! Also featuring Dean Winters (Oz, Law & Order: Special Victims Unit) you don't want to miss any of the horror as Pinhead will stop at nothing to impose his will on eternity!