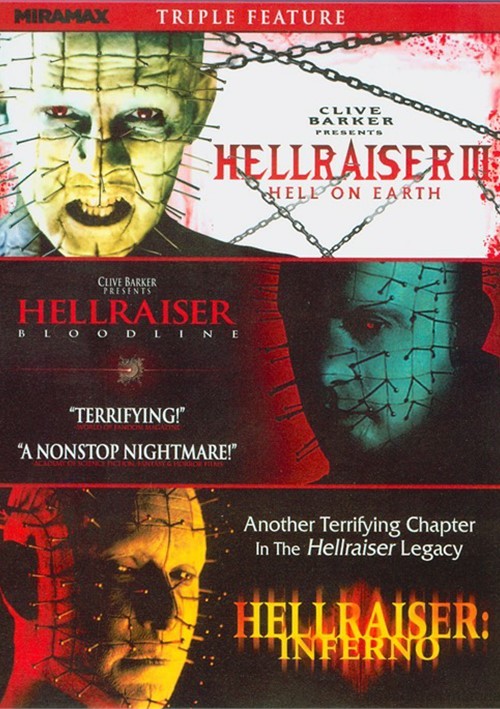 Joey Summerskill is an ambitious TV reporter whose life is changed forever when she witnesses the horrific death of a tormented teenage boy, torn apart by bloody chains. Determined to find the truth behind this gruesome vision, she discovers the Lament Configuration Box which opens the door to the Cenobite's demonic world of pleasure and pain. Once again Pinhead walks the Earth, creating a new army of Cenobite from the transmuted flesh of his victims...his one desire-to reclaim the Box and free himself forever from the powers of Hell.

Pinhead is back-and, he's out for more blood. The fourth terrifying chapter of the wildly popular Hellraiser series chronicles the struggle of one family who unknowingly created the puzzle box that opened the door of Hell-setting the diabolical Pinhead free to spread evil on Earth. Now, the family must fight to slam those doors shut again...but not before Pinhead wages one of his fiercest and most frightening battles ever.

A spine-tingling thriller, Hellraiser: Inferno is the next inescapable terrifying chapter in the heart-stopping Hellraiser series! It's the powerful story of a shady L.A, detective (Craig Sheffer - The Program, A River Runs Through It) who finds himself lost in a darkly nightmarish world of evil when he solved the mysterious puzzle box that releases the diabolical demon, Pinhead! As those around him begin to meet tragic fates, he sets out to conquer the horrifying Pinhead and escape eternal hell! Also starring popular Nicholas Turturro (TV's NYPD Blue, Excess Baggage), Hellraiser: Inferno combines great special effects and relentless thrills to deliver exciting, edge-of-your-seat entertainment!