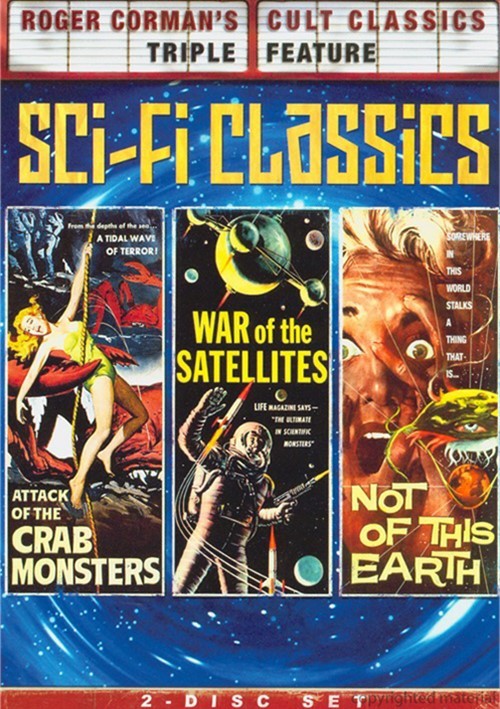 In Attack Of The Crab Monsters, a group of scientists become marooned on an island while investigating the disappearance of researchers who were looking into atomic activity in the Pacific. They quickly fall prey to giant, mutant crustaceans that have the ability to absorb the minds of their prey. Starring Russell Johnson (Gilligans Island), Richard Garland and Mel Welles (Little Shop Of Horrors).

An alien comes to Earth, masquerading as a human, to scout our planet for a new blood source in Not Of This Earth. He needs the blood of humans to take back to his planet of Davana for his dying race. Starring Paul Birch, Beverly Garland (It Conquered The World) and Jonathan Haze (Little Shop Of Horrors). These two films played as a double feature back when they were released theatrically and both films were penned by longtime Corman collaborator Charles B. Griffith, who wrote such classics as A Bucket Of Blood, Creature From The Haunted Sea and Death Race 2000.

In War Of The Satellites, an unknown f-rce declares war against planet Earth when the United Nations disobeys warnings to cease and desist in its attempts at assembling the first satellite in the atmosphere. Starring Dick Miller (Bucket Of Blood), Richard Devon (Blood Of Dracula), Susan Cabot (The Wasp Woman) and a cameo by Roger Corman.

Â· A Salute To The King Of The B?s Featuring New Interviews With Roger Corman, Peter Fonda, Peter Bogdanovich, Joe Dante And Many More
Â· Audio Commentaries on All Three Films With Tom Weaver, John Brunas and Mike Brunas, Authors of Universal Horrors
Â· The Roger Corman Trailer Collection Including Over 25 Trailers Produced and Directed by Roger Corman

Review "Attack Of The Crab Monsters / "

Reviews for "Attack Of The Crab Monsters / "