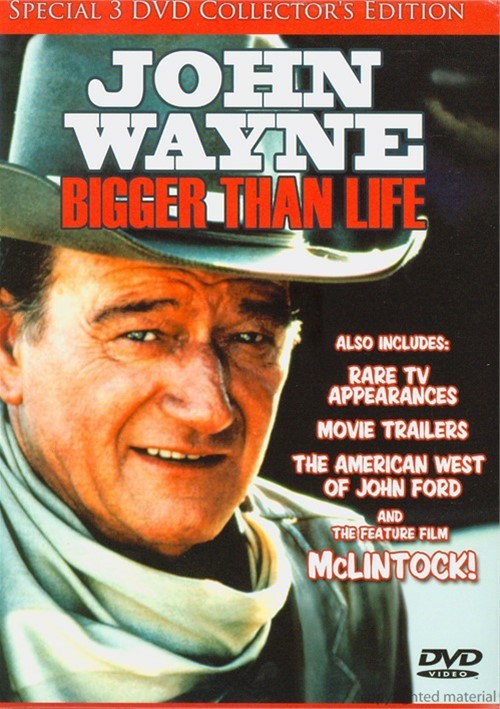 Iowa-born Marion Morrison (1907-1909) was destined to become world-famous as John Wayne. The 6'4" actor, director and producer epitomized rugged masculinity and has become an enduring American icon with his distinctive speech and swaggering walk in film like Stagecoach, Fort Apache, The Searchers, Sands Of Iwo Jima, Rio Bravo and True Grit.

"I define manhood simply," Wayne once said, discussing his screen roles. "Men should be tough, fair and courageous, never petty, never looking for a fight . . . but never backing down from one either!"

John Wayne: Bigger Than Life (1990) examines the life and films of the man who became a screen legend.

The American West Of John Ford (1971) looks at the career and classic western films of acclaimed director John Ford. It features interviews with John Wayne and other colleagues and includes clips from many of Wayne's greatest films.

No Substitute For Victory (1970), hosted by Wayne, provides a historically fascinating look at the views held by some concerning the communist threat of that time and what the U. S. military goals in Vietnam should have been.

The Western (1958) was part of the acclaimed 90-minute NBC news series Wide Wide World. The episode focused on America's fascination with western films and TV shows in the 1950s. Wayne appears with an incredible array of cinematic cowboys.

Other rare TV appearances by Wayne are also in this set including People Are Funny (1958) with Art Linkletter, The Colgate Comedy Hour (1953) and The Lucy Show (1966) with Wayne trying to shoot a western scene while star-struck fan Lucy (Lucille Ball) ruins every take.