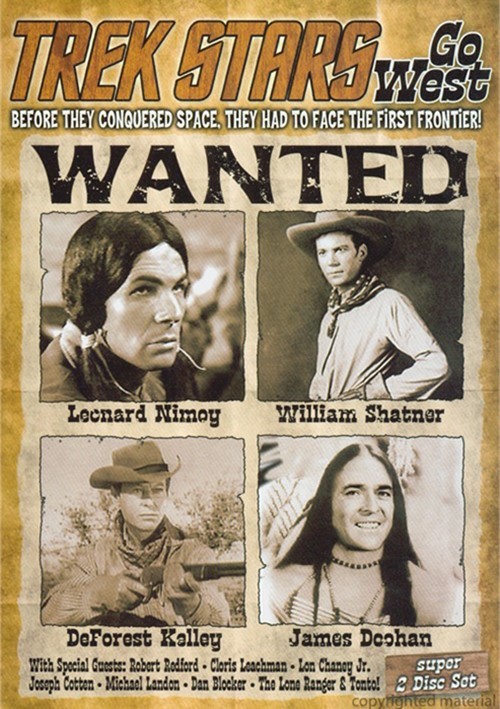 Before they conquered space, they had to face the first frontier!

Here are your four favorite Trek stars tackling the first frontier - the old West - in seven adventures spanning 1959 to 1968. Four of the tales featuring William Shatner and Leonard Nimoy were broadcast in late 1960!

From August 10, 1960, Leonard Nimoy is a long-haired conniving Comanche causing trouble for an impossibly young Robert Redford. Tate (David Mclean) was a one-armed fast gun in this critically-acclaimed but short-lived series.

From Nov. 24, 1960. Based on a novel by John Cunningham (High Noon), this epic two-parter stars Shatner as a conflicted king of thieves dealing with issues of amnesty, codes of honor, and racism. The incredible cast includes Cloris Leachman, Jack Warden, Paul Richards, Victor Buono, and Edgar Buchanan. This lost series was uniquely framed from the point of view of the outlaws themselves.

The Lone Ranger - The Legion Of Old-Timers

From Sept. 8, 1949, Deforest Kelley stars as a young rancher bedeviled by bad guys in this first regular episode (after the three-part premiere) of the popular series. With Clayton Moore and Jay Silverheels.

The Last Of The Mohicans

On July 10, 1957, actor James Doohan (with moustache) appeared as an angry villager on the episode Scapegoat (segment included). Exactly one week later he reappeared on the same series as the lead villain Tonkawa, a long-haired revenge-crazed Indian minus the moustache and cleverly changing his name to Jim Doohan in the end credits. The complete episode Way Station is featured, co-starring Lon Chaney Jr. and Joan Blackman (a future Elvis co-star in her screen debut).

Eastwood and Bronson were becoming huge stars in spaghetti westerns, so in the middle of Star Trek's original run, William Shatner threw caution to the wind and traveled to Spain to star in this tamale western. He pulled out all the stops playing half-brothers: Johnny Moon, the good guy hero, and Notah, the peyote-smoking psychotic. This film is hailed by some as a cult classic and by others as one of the worst of all time - rivaling Plan 9 From Outer Space! Co-starring Joseph Cotten.