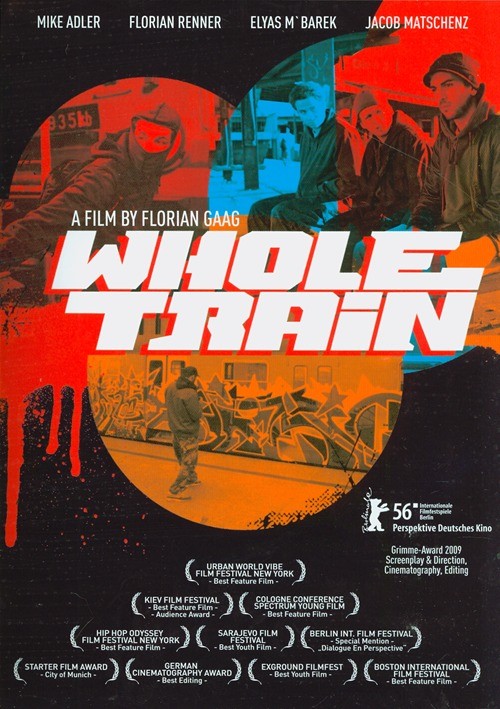 With his fantastic cinema debut Wholetrain Florian Gaag tells the story of a crew of four "writers" - David, Tino, Elyas und Achim - who observe the hierarchies, the values, the rules and the codes of the graffiti scene. Night after night they make off for the subway stations of the city, intent on leaving opulent images behind. But as another crew appears on the scene, and the four feel challenged, a creative battle ensues, one that will change the lives of these young people for ever. We are confronted with life taken to the limit. Constantly on the edge of legality. Always on the run from the law. Urban space must be reclaimed. Friends are made and lost. Unbridled creativity and doing things for the sheer love of it are watchwords too.

Wholetrain is an emotionally gripping drama that explores the secret universe of the graffiti scene. The protagonists exist in a breathless state, suspended somewhere between two worlds: their day to day life, and their existence within the crew. Florian Gaag manages to recount a tale coloured by tension and aggression. The result is a many-sided portrait of characters whose world has never been documented in this way before. Their subculture remains authentic and realistic. Edgy editing and grandiloquent camerawork, a pulsating soundtrack and an excellent ensemble of actors, make Wholetrain a film experience not to be missed. The Original Soundtrack was produced by Florian Gaag aka Aero One, who worked with lengendary figures like hip hop greats KRS-One, Freddie Foxxx, O.C., Planet Asia, Afu-Ra, Grand Agent, Tame One, Akrobatik, Reef the Lost Cauze, and El Da Sensei.