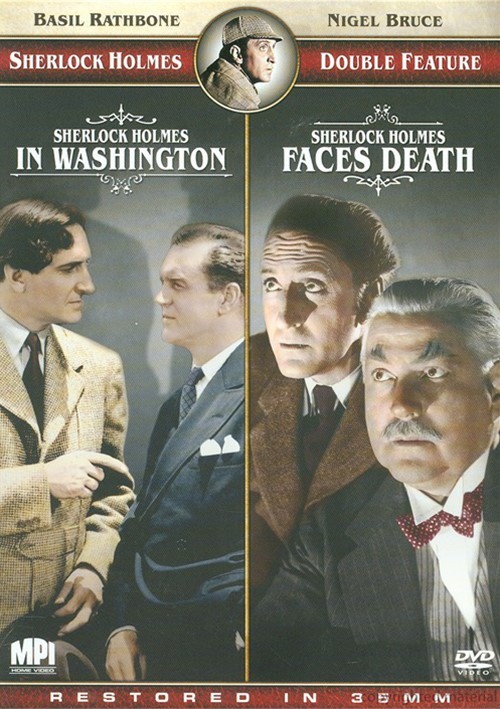 Sherlock Holmes Faces Death (1943) is an intriguing mystery based upon Sir Arthur Conan Doyle's "The Musgrave Ritual." Dr. Watson, tending recuperating soldiers housed at centuries-old Musgrave Manor, summons Sherlock Holmes to investigate strange happenings. What follows is a bizarre series of events, including murders, secret passages, a game of chess and a mysterious family ritual. Even Inspector Lestrade is on hand, as well as lovely Hillary Brooke as Sally Musgrave. But only Sherlock Holmes, in a race against time and a desperate killer, can decipher the ancient riddle and uncover the treasure it hides.

A British secret service operative, carrying top-secret microfilm from England to Washington, disappears while traveling to his destination. Fearing for his safety just before his disappearance, he passes the microfilm, ingeniously hidden, to another passenger on the train without her knowing. The agent is reported missing and Sherlock Holmes is called in to investigate.

Filmed during World War II, Sherlock Holmes In Washington pits Holmes and Watson against Nazi enemy agents. The British government asks Holmes and Watson to go to Washington to recover the missing documents before they fall into the wrong hands, which would be disastrous for England and her allies. Holmes is up against an international ring of spies in a race against time to piece together the clues and discover the whereabouts of the microfilm before it is too late.

Reviews for "Sherlock Holmes In Washington "