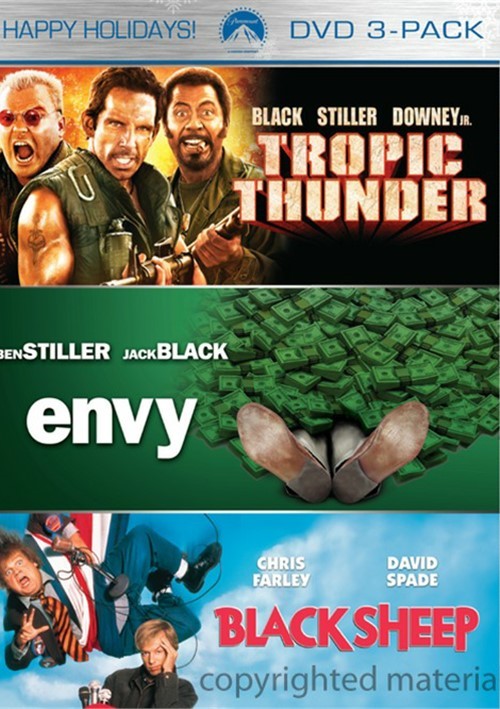 Ben Stiller, Jack Black and Robert Downey Jr. lead an all-star cast in the outrageous comedy Tropic Thunder. When three of Hollywood's biggest stars head into the jungles of Vietnam to shoot a war movie, they have no idea how real things can get. Unexpected and controversial, Tropic Thunder is "A knockout of a comedy that keeps you laughing." - Peter Travers, Rolling Stone

Tim (Ben Stiller) and his best friend, Nick (Jack Black), shared and shared alike, until Tim turned down a chance to invest in Nick's latest crazy invention. Now nick is raking in the millions while his buddy is green with envy. Enter a cagey and conniving vagabond (Christopher Walken), who's got a plan to turn the tables and steer a little profit to himself. See what happens when Envy turns this comedy into a marathon of laughs everyone will enjoy!

Campaign aide and super slacker Steve Dobbs (David Spade) volunteers to baby-sit Mike. Big mistake! When Mike discovers that the incumbent governor is a crook, he dives headfirst into a whole new level of well-intended destruction.

Chris Farley and David Spade, the stars of Tommy Boy, once again show why they are "the comedy team of the '90s!" (Leo Quinones, KIIS-FM). Directed by Penelope Spheeris (Wayne's World and costarring Gary Busey, Black Sheep is "a crowd pleaser directed with maximum energy!" (Kevin Thomas, Los Angeles Times)