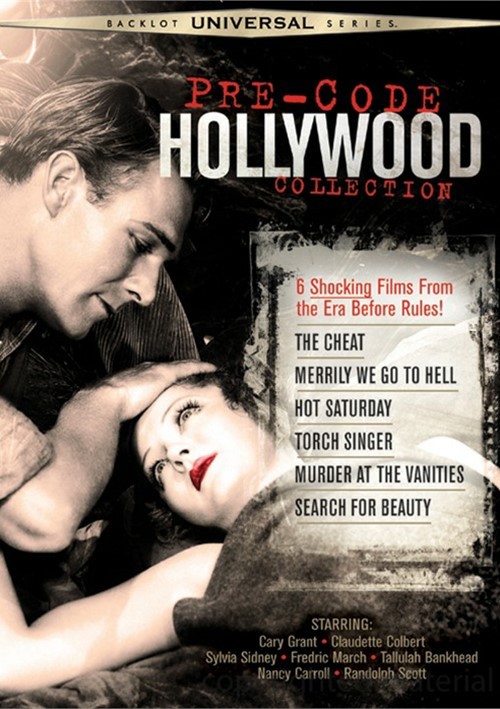 For the first time ever, Universal opens its vaults to bring you 6 classic films from the most decadent era in motion picture history: Pre-Code Hollywood. In 1934, Hollywood was turned upside down by the enf-rcement of a strict "Production Code" that would change the way movies were made for the next 34 years. During the "pre-Code" period (1929 to mid-1934), censorship barely existed in Hollywood and filmmakers had free reign to make the movies they wanted and the public demanded. No subject was taboo including adultery, murder, or sex. Starring screen legends Cary Grant, Fredric March, Claudette Colbert, Tallulah Bankhead, Randolph Scott, and Sylvia Sidney, the Pre-Code Hollywood Collection forever captures one of the most unique periods in cinema history.

A compulsive gambler (Tallulah Bankhead) will do anything to pay off her debt - including turning to a wealthy businessman behind her husband's back.

Merrily We Go to Hell

An abusive alcoholic (Fredric March) reunites with a woman from his past and drives his wife (Sylvia Sidney) to drastic measures.

Scandal erupts after a young woman (Nancy Carroll) innocently spends the night with a notorious playboy (Cary Grant) and neglects to tell her fiancÃ© (Randolph Scott).

After giving up her illegitimate child for adoption, a notorious nightclub singer (Claudette Colbert) attempts to find her daughter through a children's radio show.

Murder at the Vanities

While sexy musical revue "The Vanities" captivates an audience on its opening night, a murder investigation takes place backstage.

Olympic swimming champions (Buster Crabbe and Ida Lupino) are tricked into endorsing a racy magazine - and much worse.