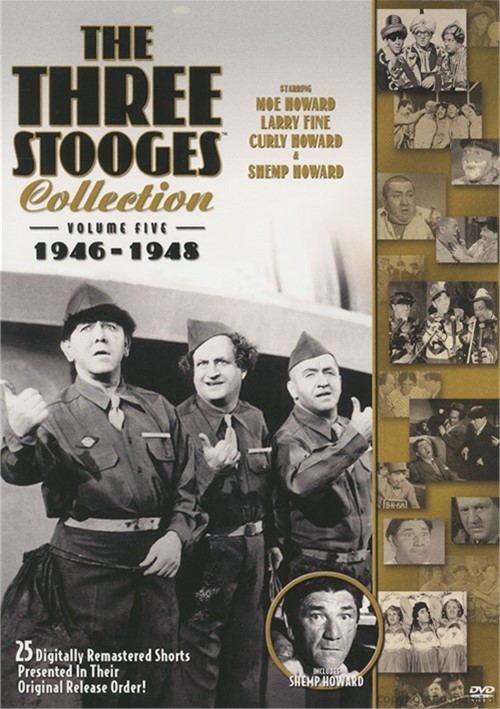 This fifth collection of The Three Stooges, which features 25 digitally remastered shorts from 1946-1948, marks the end of Curly's career with the Stooges and the return of original Stooge Shemp. Curly suffered a stroke on the final day of filming Half-Wits Holiday and retired at age 43. Moe realized there was only one person who could fill baby brother Curly's shoes: his older brother Shemp (who, ironically, Curly had replaced in 1932).

The Three Stooges were born in 1925 when Moe and Shemp met Larry Fine. But the 1930's Shemp left to pursue a film career in Hollywood. By the time Moe called in 1946, he was starring in films with the likes of W.C. Fields, John Wayne and Abbott and Costello. But he accepted Moe's offer, and the original Three Stooges reunited.

Shemp's first short upon his return was Fright Night . And Curly did recover enough to make an appearance in Hold That Lion, but his health continued to deteriorate and he unfortunately passed away in 1952 at age 48. The Three Stooges Collection Volume 5 is bittersweet for the change but filled with more fun than ever and the added bonus of not only Larry, Moe and Curly, but Shemp too!