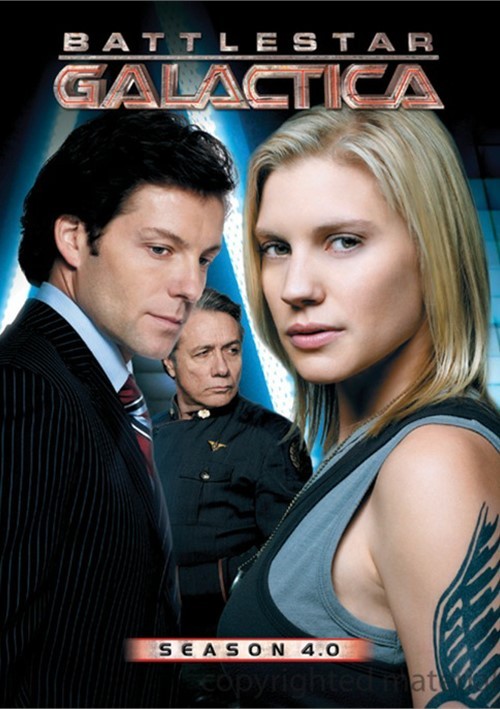 They've traveled millions of miles and defied relentless attackers, but nothing will prepare the human race for what lies ahead as Battlestar Galactica 4.0 arrives on DVD! In ten gripping episodes, relive each pivotal moment as the civil war amongst the Cylons escalates and the quest for Earth continues. Loaded with riveting bonus features, this 4-disc set includes the unrated, extended version fo Battlestar Galactica: Razor that never aired on television. Presented uninterrupted and in Dolby Digital 5.1 Surround Sound, it's the epic phenomenon that critics call "a truly great show!" (Mary McNamara, Los Angeles Times)

On the eve of a devastating Cylon attack, officer Kendra Shaw reports for duty on the battlestar Pegasus. When mankind's future is forever changed on that fateful day, Kendra is reshaped into a "razor" - a tool of war - under the ruthless guidance of her commander, Admiral Cain. Battlestar Galactica: Razor tells the untold story of Pegasus and provides chilling clues to the fate of humanity as the final chapters of the Battlestar Galactica story unfold.

- He That Believeth In Me

- The Ties That Bind

- Unrated extended version of Battlestar Galactica: Razor
- Behind-the-Scenes Featurettes:
The Journey - Cylons: The Twelve - Season 4.5: The Untold Story - Untold - The Music of Battlestar Galactica - Caprica Sneak Preview
- Deleted Scenes
- Podcasts
- Producer's Video Blogs:
Love In Space - Why Hath David Forsaken Us? So, This Is It - What Next? What Now? - Digital Pressure - Space Cowboys - Lucy's Breakdown - Are You Frakkin' Kidding Me? - I'm A Frakkin' Cylon - Last Call