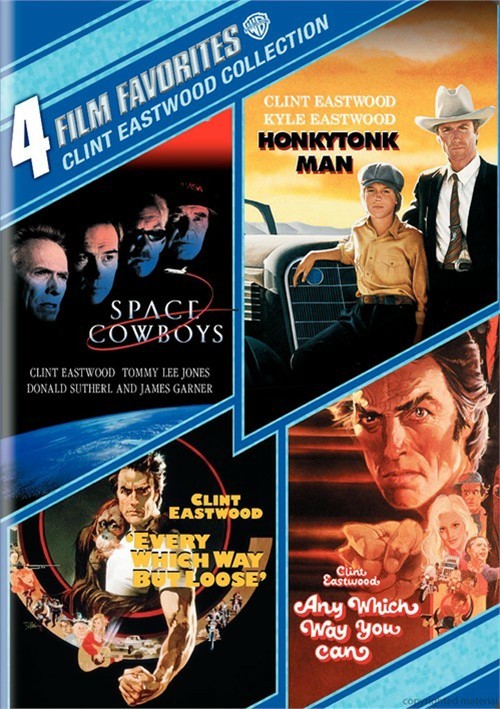 Red Stovall (Clint Eastwood) is a Depression-era rascal whose fire-in-the-belly passion comes from the whiskey he slugs and the dream he chases: singing at the Grand Ole Opry. He takes off on a drive from Oklahoma to audition in Nashville with nephew Whit (Clint's son Kyle Eastwood) along to help keep the car on the road and Red on the straight and narrow.

Every Which Way But Loose

Philo Beddoe is your regular, easygoing, truck-driving guy. He's also the best barroom brawler west of the Rockies. And he lives with a 165-pound orangutan named Clyde. Like other guys, Philo finally falls in love - with a flighty singer who leads him on a screwball chase across the American Southwest. Nothing's in the way except a motorcycle gang, two sneaky off-duty cops and legendary brawler Tank Murdock.

Every Which Way But Loose was a change of pace for Clint Eastwood- and it proved to be one of his most popular films. With a soaring country score and a solid supporting cast including Sondra Locke, Geoffrey Lewis, Beverly D'Angelo and the great Ruth Gordon, it's in every which possible a grand time for all.

They're back. Philo Beddoe, the easygoing truck driver and bare-knuckle brawler, and his 165-pound orangutan friend Clyde get into more mischief in this faster and funnier sequel to Every Which Way But Loose.

Clint Eastwood stars again as Philo, now thinking he'll "retire" from fighting. But a new contender lures him back- and mobsters kidnap Philo's girl (Sondra Locke) to ensure he'll turn up for the showdown.

Ruth Gordon as Ma, Geofrey Lewis as Orville and those hapless motorcycle morons called the Black Widows all return in fine form. Songs by Glen Campbell, Jim Stafford and Snuff Garrett make up a tuneful country score, including an Eastwood/Ray Charles duet on "Beers to You." As ever, Clyde steals the show, particularly in a courtship scene with the lady orangutan of his dreams. Any Which Way You Can, and you'll be entertained.

Every Which Way But Loose
- Production Notes
- Theatrical Trailer

Any Which Way You Can
- Production Notes
- Theatrical Trailer