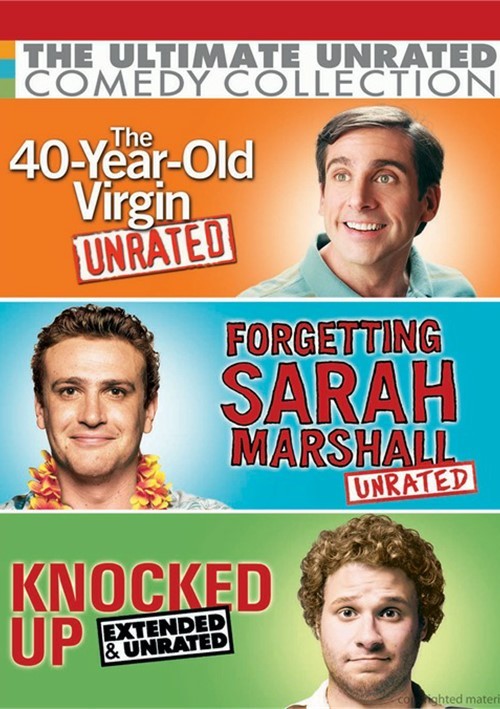 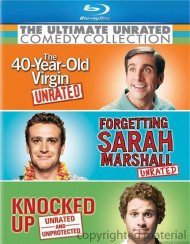 Comedy sensation Steve Carell is Andy Stitzer, a nice guy who has gone 40 years without "doing it". Now his pals are making it their mission to help him score... fast! Can he survive their misguided advice? Or will he find true love where he least expects it.

Get ready for a raunchy and hilarious look at getting dumped... and coming out ahead. Peter (Jason Segel) is a struggling musician who finds his world turned upside down when his TV celebrity girlfriend, Sarah Marshall (Kristen Bell), dumps him for a tragically hip rock star. It's the hysterically funny look at how far one man will go to forget a girl... and all the fun he finds along the way!

They say that opposites attract. For slacker Ben (Seth Rogen) and career girl Alison (Katherine Heigl) that's certainly the case - at least for one intoxicated evening. Two months and several pregnancy tests later, Ben and Alison go through a hysterically funny, anxious and heartwarming journey that leads to huge laughs!

The 40-Year-Old Virgin: Unrated Double Your Pleasure Edition
- Directing The Virgin: The director's video diary of life on the set.
- Assembling The Ensemble: Hilarious footage of the cast auditions.
- Reel Comedy Roundtable: Join director Judd Apatow, star Steve Carell and the cast as they share their unforgettable stories from the set.
- Steve Carell Uncensored: Unedited takes of Steve Carell creating side-splitting scenes.
- Sneak Peek Of Knocked Up: The next big comedy from the co-writer/director of The 40-Year-Old Virgin.
- Preparing For The Big Game: Rehearsals of the riotous poker scene.
- Cinemax FinalCut: An inside look at the most memorable and outrageous scenes.
- And Much, Much More!