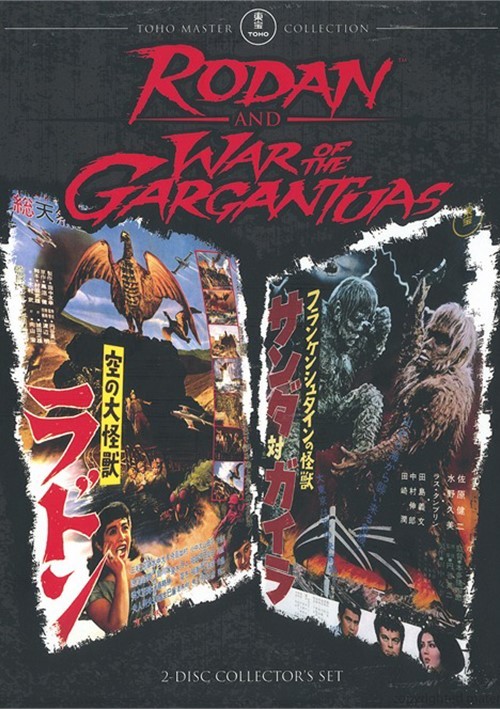 Ishiro Honda's Rodan (Sora No Daikaiju Radon, 1956) is among the most popular films from the era of vintage science fiction cinema. A small village is besieged by deadly man eating insects. When Shigeru (Kenji Sahara) travels deep into a mineshaft to exterminate the beasts, he makes an even more horrifying discovery: Rodan, the flying monster! Two giant pterodactyls terrorize Japan, soaring through the sky and blowing away cities with wing whipped gusts. How will the world survive this seemingly unstoppable threat?

War Of The Gargantuans (Furankenshutain No Kaiju: Sanda Tai Gaira, 1966) is one of director Ishiro Honda's masterpieces of monster mayhem. A deadly giant terrorizes Japan, sinking ships and attacking fishermen. Using a space age ray cannon, the military nearly kills the monster before its enormous brother comes to the rescue. The two garganutas don't see eye to eye, and their monster sized sibling rivalry leads to a death match in the streets of Tokyo, with civilization hanging in the balance.

Review "Rodan / War Of The Gargantuans"

Reviews for "Rodan / War Of The Gargantuans"