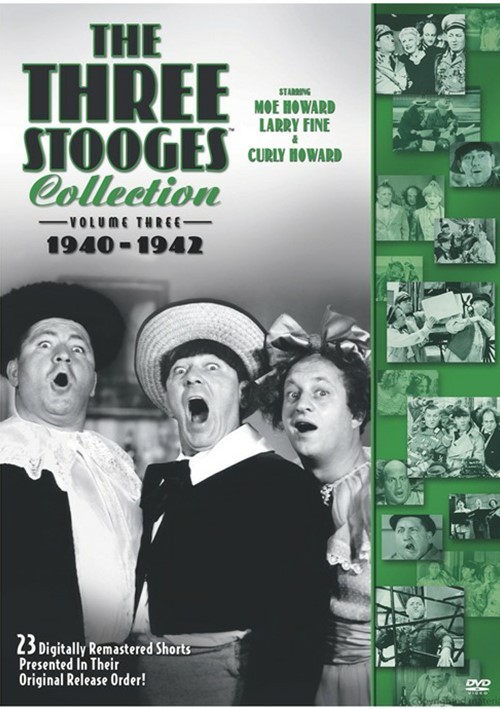 The Golden Age of the Three Stooges continues in this exceptional third chronological collection. These 23 shorts from 1940-1942 are all digitally remastered for the highest quality in sight and sound, and this collection is even more special as it features an historical first: Moe Howard was the first American to portray Hitler on film, in 1940's You Nazty Spy, which was Moe's personal favorite. It also contains the outstanding 1941 sequel, I'll Never Heil Again. Moe as a vicious dictator - who would have thought?! With biting satire and merciless wit, the Three Stooges gave the world a brave new perspective on the absurdity of evil and the world powers of the time.

This collection also contains Curly's favorite, A Plumbing We Will Go, which features the brilliant sight gag of a burst of water flowing from a new television set just as it's broadcasting a live report from Niagara Falls.

The Three Stooges Collection Volume Three will soitenly keep you entertained as Larry, Moe and Curly portray a variety of characters in theie own inimitable way!

- Rockin' Thru the Rockies

- A Plumbing We Will Go

- From Nurse to Worse

- No Census, No Feeling

- All The World's a Stooge

- An Ache in Every Stake

- In the Sweet Pie and Pie

- Some More of Samoa