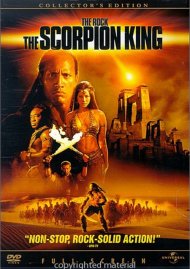 Adventure rules! The spectacular Mummy series explodes into a new realm of breathtaking, nonstop action in The Scorpion King! Unleashing WWE superstar The Rock as the most fearsome warrior of the ancient world, The Scorpion King plunges you into a sweeping tale filled with stunning fight sequences, awe-inspiring battles and pulse pounding thrills. It's the ultimate special effects powered epic and the must see and see again adventure of the year!

Includes a FREE movie ticket to The Mummy: Tomb Of The Dragon Emperor, in theaters August 1st!

Reviews for "Scorpion King, The"