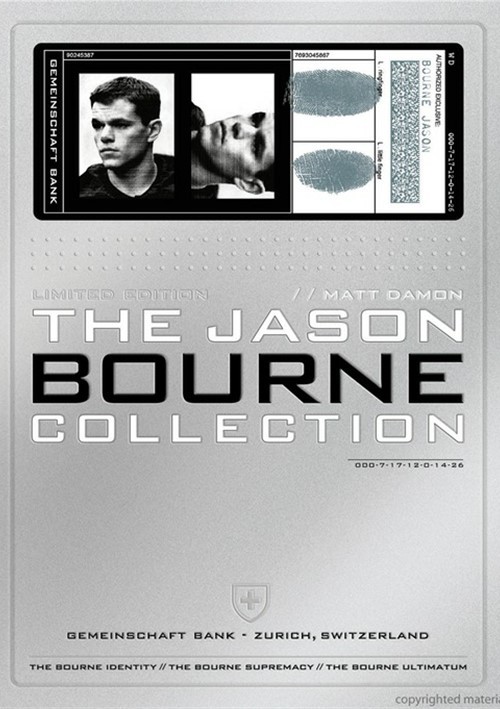 Get ready for non-stop action, edge-of-your-seat suspense and spectacular chase sequences with everyone's favorite assassin in The Jason Bourne Collection! Matt Damon is Jason Bourne, an elite government agent determined to outwit and outmaneuver anyone who stands in the way of his finding out the secrets of his mysterious past. Follow his explosive, action-packed adventures in three blockbuster films from one of the most popular series of all time: The Bourne Identity, The Bourne Supremacy and The Bourne Ultimatum. Loaded with hours of bonus features, The Jason Bourne Collection is the ultimate Bourne experience for movie fans everywhere!

Deleted Scenes: See even more action from all three films in these deleted scenes.
The Bourne Diagnosis: A renowned UCLA psychologist probes into the intriguing causes and effects of Jason Bourne's amnesia and its central role in this gripping espionage thriller!
Keeping It Real: A look at the edgy and unique style the filmmakers brought to Supremacy.
Blowing Things Up: Virtual isn't always better. See how some of the film's most awesome pyrotechnic sequences were created - without digital effects.
Man On The Move: Jason Bourne: From Berlin to Tangier, see how the film's exotic locations influenced the filmmaking!
Planning The Punches: Matt Damon reveals his complicated fight training.
The Ludlum Files: Get to know the creative genius behind Jason Bourne's amazing adventures through in-depth interviews with his family and friends. Discover the true beginnings of the Bourne phenomenon, and see how the character continues to fascinate readers and moviegoers around the globe.

Reviews for "Jason Bourne Collection, The"