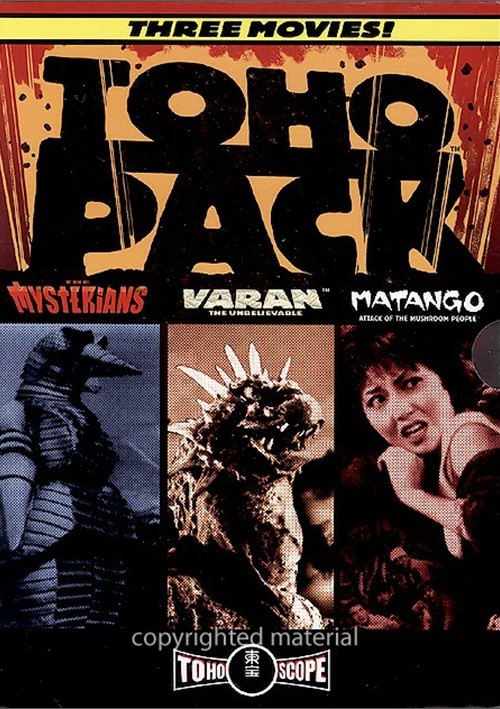 After a Japanese town is totally destroyed the military arrive to investigate. They encounter a giant robot that is decimating everything in its path. A dome appears out of the ground and a group of scientists are invited meet the alien Mysterians from the planet Mysteroid. The Mysterians have come in peace - all they ask humanity for is three-square kilometers of land and the right to interbreed with Earth women to repopulate their species. Outraged at such a suggestion, humanity declares war on the Mysterians.

Matango Attack of The Mushroom People

Attack of the Mushroom People! After a yacht is damaged in a storm and stranded on a deserted island the passengers; a psychologist his girlfriend a wealthy businessman, a famous singer, a writer, a sailor and his skipper take refuge in a fungus-covered boat. While using the mushrooms for sustenance they find the ships journal describing the mushrooms to be poisonous, however some members of the shipwrecked party continue to ingest the mysterious fungi transforming them into hideous fungal monsters.

During an excursion to research an unusual butterfly in the mountains of northeastern Japan two explorers are mysteriously killed. The natives of the island blame the deaths on their God 'Varan' who becomes enraged at the sight of humans.

A second group of researchers, not heading the natives warning, rouse the gigantic angry beast and evoke the destruction of the native village. The Self-Defense F-rce launches a counter attack; Battleships, Tanks, and high-powered explosives, deployed to halt the spiny backed, flying creature as it heads for the ultimate stomping ground - Tokyo.