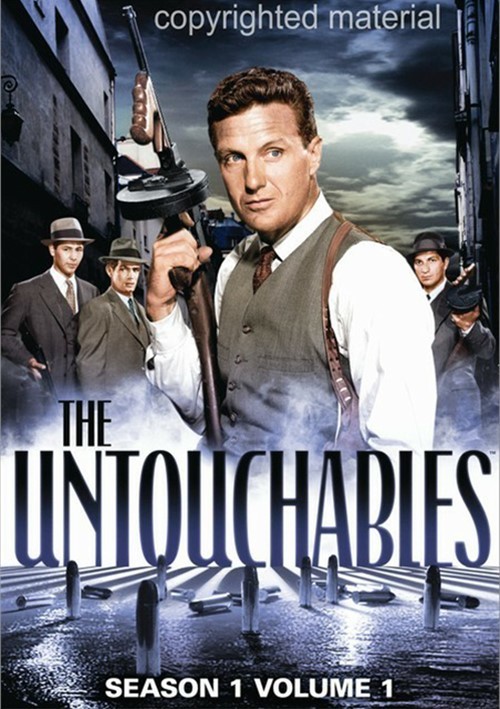 The Untouchables comes to DVD for the first time, featuring the first 14 of 28 Season One episodes, plus "The Scarface Mob," the seamless movie version of the ground-breaking two-part pilot first broadcast on the Westinghouse Desilu Playhouse. Considered one of the best crime series of its time, the hit show starred Emmy winner Robert Stack (Unsolved Mysteries) as real-life Chicago gangbuster and prohibition agent Eliot Ness, famous for bringing down the notorious Al Capone.

Executive Produced by Quinn Martin (TV's The Fugitive) and narrated by Walter Winchell, whose distinctive voice lent credibility to the show, the resulting series depicting 1930s Chicago was dramatic fiction with documentary authenticity... and became an instant classic! Each week, Ness and his men wrestled with such flavorful villains as Dutch Schultz, Lucky Luciano... even Ma Barker! But these agents could never be bought off. They were The Untouchables!

The Untouchables is back, featuring the final 14 Season One episodes, digitally remastered and on DVD for the first time!

This vintage series, set in Prohibition-era Chicago, pits the maverick lawmen known as "The Untouchables" against mobsters holding court against any and all challengers. Robert Stack (TV's The Name Of The Game) stars as federal agent Eliot Ness, who was responsible for Al Capone's downfall. Now in Season 1 Volume 2, Ness and his men go after Frank Nitti, Capon's main enf-rcer, as well as a slew of other mobsters and incorrigibles.

Produced by Quinn Martin (TV's The Fugitive, The Streets Of San Francisco) and narrated by columnist Walter Winchell, the series approaches greatness on the strength of its top-notch cast, dynamic action sequences, and brilliant re-creation of the 1930s. For a knockout combination of timeless entertainment and classic crime drama, you can't top The Untouchables!

Reviews for "Untouchables, The: Season 1 Pa"