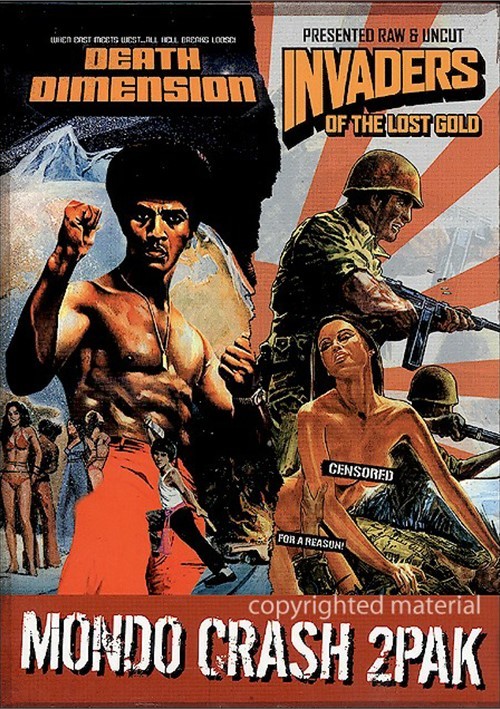 The Pig (Harold "Odd Job" Sakata) has a plan to eradicate the population of Nevada with a freeze bomb that instantly turns hot babes into icy cadavers. It is up to Detective Ash (Jim "Black Belt Jones" Kelly) to stop him and stop the sale of this horrible new weapon to the highest bidder. At the same time, he must protect the secret plans for the ice bomb which are embedded in a microdot hidden in the forehead (yes under the skin and all that) of the inventor's sexy assistant. Death Dimension is an adventure that will take Ash into desert mountains, hottie filled hot tubs, and a helicopter gun fight with Saturday night specials!

If you were expecting Enter The Dragon, then wake up and smell the groovy Funk-edelic soundtrack on this one! Jim Kelly takes red jumpsuits to new heights, as he battles Haitian henchmen (yes, we said Haitian!) the ever grunting, bowler wearing, villain Harold Sakata (hey, hasn't he played a character like this before?) all while George Lazenby wanders around wondering why he gave up being James Bond to be in this movie instead. So if you're looking for a child of the Bruce Lee era that's so bad it's good, then step into the Death Dimension!

Invaders Of The Lost Gold

A group of Japanese soldiers in WWII are escorting a large shipment of gold through the jungles of the occupied Philippines when they are ambushed by a group of bloody thirst cannibals. As the Japanese soldiers are dismembered after a savage battle, the few survivors hide the gold and escape back to safety.

Invaders Of The Lost Gold is a classic thriller of a gory jungle adventure with an all star cast that no collection of cult horror cinema should be without! Part Cannibal Holocaust and part Raiders Of The Lost Ark, don't miss this amazing mix of gore, adventure, eroticism, and action!