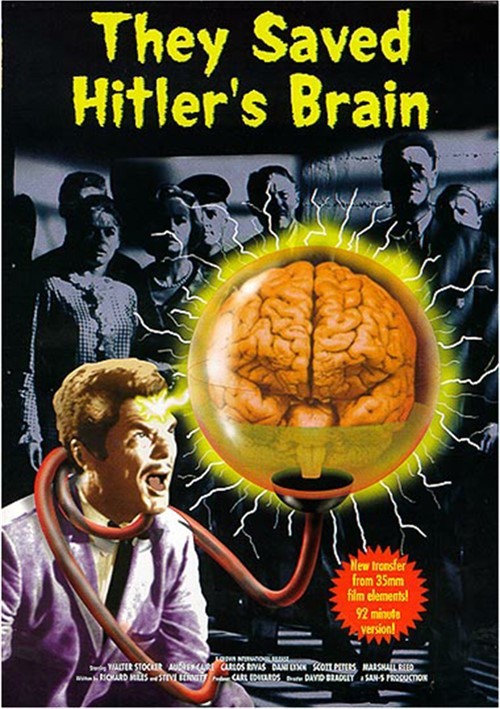 Director David Bradley (Julius Caesar), award-winning cinematographer Stanley Cortez (The Magnificent Ambersons), and film star Carlos Rivas (True Grit) have made a film only Ed Wood could be proud of. They Saved Hitler's Brain, aka Amazing Mr. H, aka Madmen of Mandoras, started production in the '50s, but it wasn't until the early '60s when some UCLA film students spliced in extra footage that it was ready for release.

It seems Hitler's head is being kept alive on Mandoras, a tiny Caribbean island controlled by Nazis. "Mr. H" and his buddies are planning on spraying every major city with a deadly nerve gas, then take over the world. Only Professor John Coleman and his antidote stand in their way. When John is kidnapped, his son-in-law Phil, and daughter Kathy fly to his rescue. Mandoras is crawling with Germans, but luckily Phil is helped by the Chief of Police and His Excellency. It's a hoot, especially scenes like the car chase, which bounces back and forth between day and night, and the finale, in which Adolph's head is caught in a fiery wreck and melts. Oh, the madness of it all!

Reviews for "They Saved Hitler's Brain"