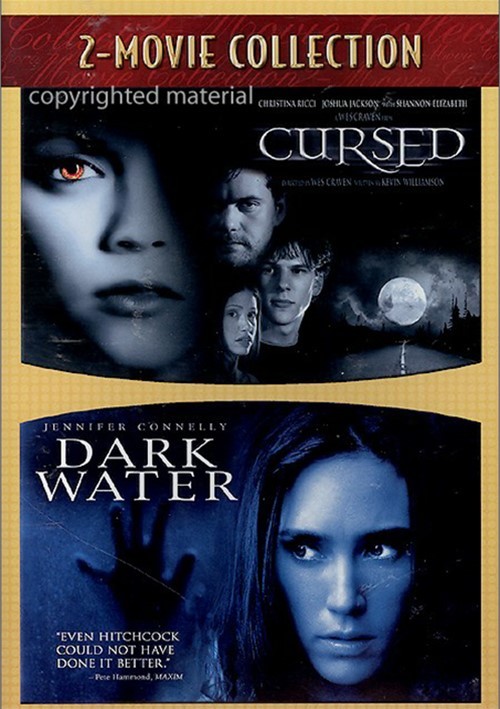 Frightmaster Wes Craven brings you the terror of werewolves and a cast of today's hottest young stars in Cursed! Christina Ricci (Monster), Jesse Eisenberg (The Village), Joshua Jackson (TV's Dawson's Creek), Judy Greer (The Village) and Milo Ventimiglia (TV's Gilmore Girls) find themselves caught up in an unimaginable horror! A werewolf loose in Los Angeles changes the lives of three young adults who, after being mauled by the beast, learn that the only way to break the curse put upon them is to kill the one who started it all! Unstoppably frightening and undeniably fun, it's the latest hit from the team that thrilled you with Scream!

With a haunting mystery at its core, Dark Water is a thoroughly absorbing, suspense-filled thriller starring Jennifer Connelly. Dahlia Williams (Connelly) and her five-year-old daughter are ready to begin a new life together. But their new apartment - dilapidated and worn - suddenly seem to take on a life of its own. Mysterious noises, persistent leaks of dark water and other strange happenings in the deserted apartment above send Dahlia on a haunting and mystifying pursuit - one that unleashes a torrent of living nightmares.

Cursed
Behind The Fangs: The Making of Cursed
The Cursed Effects
Creature Editing 101
Becoming A Werewolf

Dark Water
"The Sound of Terror: The Subliminal Soundscapes Of Dark Water" - Featurette on the movie's sound design
Analyzing Dark Water Sequences - Explore the creation of specific scenes with viewing options
"Beneath The Surface: The Making Of Dark Water" Featurette
"An Extraordinary Ensemble" Featurette