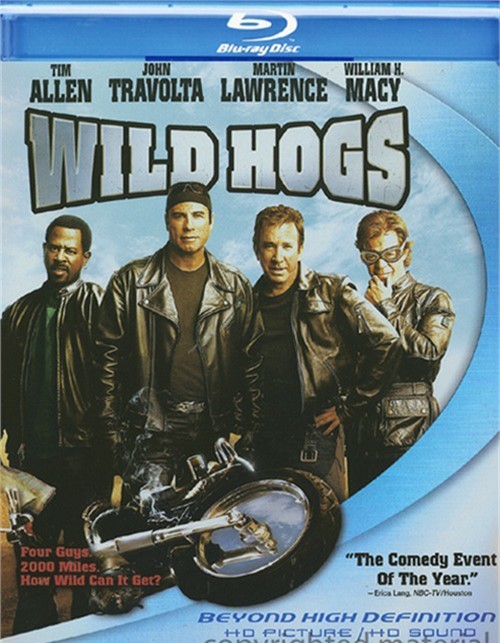 Join four friends who aim to rev up their ho-hum suburban lives with a cross-country motorcycle adventure. Tim Allen, John Travolta, Martin Lawrence and William H. Macy star in Wild Hogs, the born-to-be-wildly funny comedy that'll get your motor runnin' faster than ever on Blu-ray Disc!

Hitch a ride as these hapless weekend warriors don their leathers, fire up their bikes and throw caution and their cell phones to the wind as they hit the open highway. But a lot can happen on the road to nowhere, including a run-in with the Del Fuegos, a bad-to-the-bone biker gang. Feel the breeze in your hair - and the bugs in your teeth! - as the open highway races by in the eye-popping clarity of high definition, while engines roar and tires screech in spectacularly souped-up audio. Your whole family will go hog wild over the hilarious misadventures and madcap mayhem that ensue with Blu-ray High Definition.

Freewheeling Alternate Ending
High-Octane Deleted Scenes
Outrageous Outtakes
How To Get Your Wife To Let You Buy A Motorcycle
Bikes, Brawls And Burning Bars: The Making Of Wild Hogs
Audio Commentary With Director Walt Becker And Writer Brad Copeland