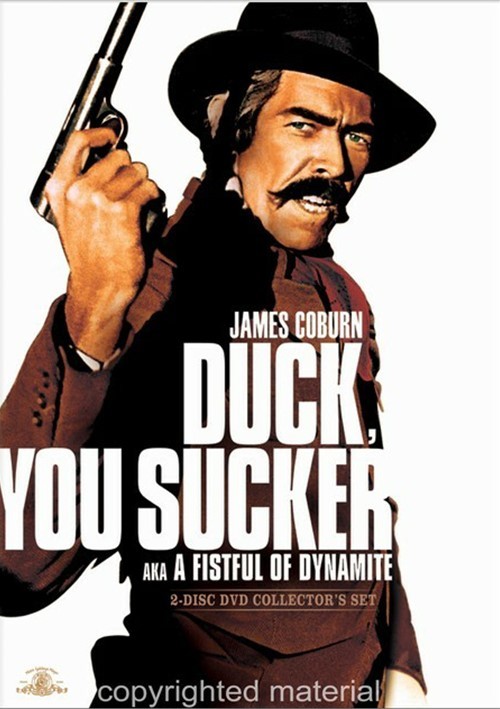 From the acclaimed director of The Good, The Bad And The Ugly, A Fistful Of Dollars and For A Few Dollars More comes a relentlessly entertaining film that teams an Irish terrorist with a Mexican peasant-turned-revolutionary with thunderously explosive results! Starring Oscar winner Rod Steiger and western icon James Coburn, Duck, You Sucker delivers more thrills than ever before with an all-new Collector's Edition loaded with never-before-seen special features including a commentary track, six featurettes and more!

Juan Miranda (Steiger) is a cigar-chomping, salt-of-the-earth peasant with a Robin Hood heart. John Mallory (Coburn) is a dynamite-tossing Irish revolutionary who has fled to Mexico to practice his skills. Together, they're a devilishly volatile mix of anti-establishment philosophies and violent tendencies as they attempt to liberate political prisoners, defend their compatriots against a well-equipped militia, and risk their lives on a train filled with explosives.

Audio Commentary by Noted Film Historian Sir Christopher Frayling.
Sergio Donate Remembers Duck, You Sucker Featurette
The Myth Of Revolution: Sir Christopher Frayling Discusses Leone's Political Leanings, His Method And His Style
Once Upon A Time In Italy (AKA: The Autry Exhibition): A Behind-The-Scenes Look At Putting Together An Exhibit On Leone
Sorting Out The Versions Featurette
Restoration Italian Style: John Kirk Discusses Restoring The Original Italian Version For The First DVD Release
Location Comparisons Then To Now: Film Clips Intercut with Current Footage Of The Locations Used
6 Radio Spots
Original Theatrical Trailer

Reviews for "Duck, You Sucker (Fistful Of D"