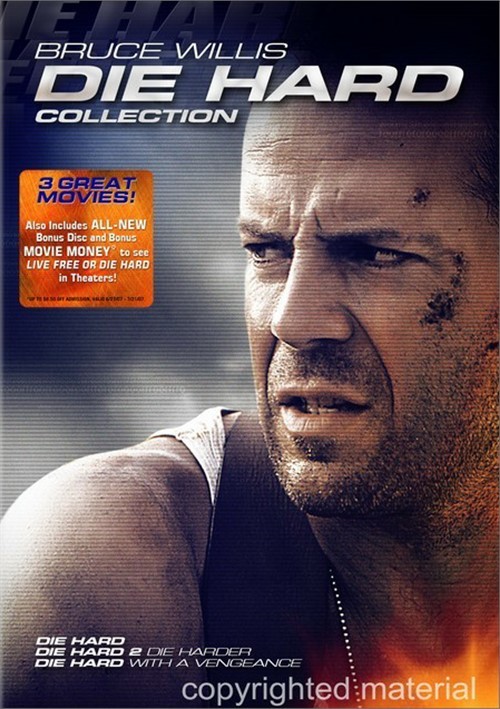 When Bruce Willis exploded onto the big screen as John McClane, a smart, funny, one-of-a-kind New York City cop who lands in one-of-a-kind predicaments, millions of fans worldwide cheered him on, and the bar for action films was forever raised! Now available in one action-packed collection are all three Die Hard films, along with an exclusive supplemental disc that includes an hour of all-new, behind-the-scenes material about the fast-action thriller franchise that took the world by storm!

In the high-rise, high-stakes Die Hard series opener, Detective John McClane heads for Los Angeles to spend the holidays with his estranged wife Holly (Bonnie Bedelia). But while McClane waits for Holly's office party to end, terrorists take control of the building. As their sinister leader, Hans Gruber (Alan Rickman), and his savage henchman (Alexander Godunov) round up hostages, McClane gets ready to blast a few rounds of his own and launch a one-man war - as only McClane can!

Off-duty in the nation's capital, McClane spends his Christmas Eve battling a team of terrorists and their murderous leader (William Sadler), who have taken over a major international airport, while he copes with an inept airport police chief (Dennis Franz) and the knowledge that his wife (Bonnie Bedelia) is trapped in a plane desperately low on fuel, circling overhead!

Die Hard With a Vengeance

Exploding with special effects, unexpected comedy and nonstop thrills, the third chapter of the hugely successful Die Hard series finds McClane the personal target of a terrorist (Jeremy Irons) determined to blowup New York City if he doesn't get what he wants. Accompanied by a psychopathic genius in this thrill-a-minute adventure that grabs you and doesn't let go!