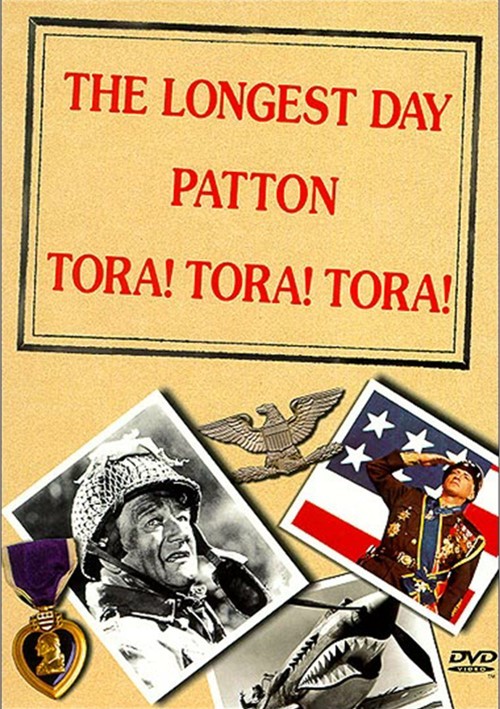 A Collection Of A Few Of The Greatest WWII Films Ever Made.

On June 4, 1944, the Allied Invasion of France marked the beginning of the end of Nazi domination over Europe. The attack involved 3,000,000 men, 11,000 planes and 4,000 ships, comprising the largest armada the world has ever seen.

Presented in its original black & white version, The Longest Day is a vivid, hour-by-hour re-creation of this historic event. Featuring a stellar international cast, and told from the perspectives of both sides, it is a fascinating look at the massive preparations, mistakes and random events that determined the outcome of one of the biggest battles in history. Winner of two Oscars (Special effects and Cinematography), The Longest Day ranks as one of Hollywood's truly great war films.

A critically acclaimed film that won a total of eight 1970 Academy Awards (Including Best Picture), Patton is a riveting portrait of one of the 20th Century's greatest military geniuses. One of its Oscars went to George C. for his triumphant portrayal of George Patton, the only Allied General truly feared by the Nazis. Charismatic and flamboyant, Patton designed his own uniforms, sported ivory-handled sex-shooters, and believed he was a warrior in past lives. He outmaneuvered Rommel in Africa, and after D-Day led his troops in an unstoppable campaign across Europe. But he was rebellious as well as brilliant, and as Patton shows with insight and poignancy, his own volatile personality was one enemy he could never defeat.

Tora! Tora! Tora! Is the Japanese signal to attack -- and the movie meticulously recreates the attack on Pearl Harbor and the events leading up to it. Opening scenes contrast the American and Japanese positions. Japanese imperialists decide to stage the attack. Top U.S. brass ignore its possibility. Intercepted Japanese messages warn of it -- but never reach F.D.R's desk. Radar warnings are disregarded. Even the entrapment of a Japanese submarine in Pearl Harbor before the attack goes unreported. Ultimately the Day of Infamy arrives -- in the most spectacular, gut-wrenching cavalcade of action-packed footage ever. It's the most dazzling recreation of America's darkest day -- and some of her finest hours.