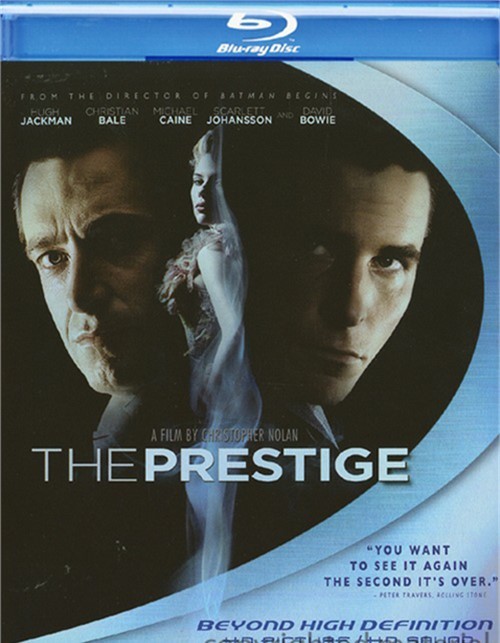 Hugh Jackman, Christian Bale, Michael Caine and Scarlett Johansson are pure magic in The Prestige on Blu-ray Disc. Dubbed "wildly entertaining" by Rolling Stone, this riveting tale is more astounding than ever in this dazzling new format.

Two young, passionate magicians are friends and partners until one fateful night when their biggest trick goes terribly wrong. Now the bitterest of enemies, they will stop at nothing - including deceit and sabotage - to learn each other's secrets. Experience their obsessive rivalry in eye-popping 1080p and resounding 5.1 48kHz, 24-bit uncompressed audio. But remember, nothing is what it seems, so be prepared to watch over and over again as Blu-ray High Definition teases and tantalizes your senses!

Every Magic Trick Has Three Acts:

The Pledge - The promise to amaze.

The Turn - The mind-bending illusion.

The Prestige - The shocking climax.

Backstage - The Director's Notebook: The Cinematic Sleight Of Hand Of Christopher Nolan
Â·Conjuring The Past
Â·The Visual Maze
Â·Metaphors Of Deception
Â·Advocate For The Audience
Â·Tesla: The Man Who Invented The Twentieth Century

Reviews for "Prestige, The"