Revenge Of The Nerds: The Atomic Wedgie Collection 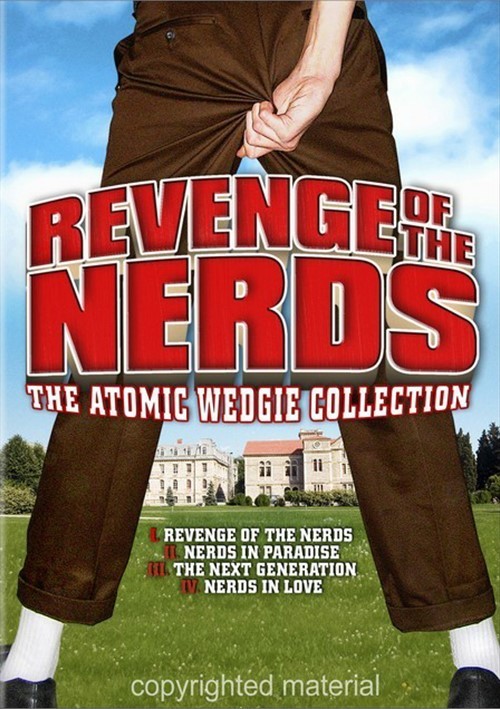 Revenge Of The Nerds: The Atomic Wedgie Collection

Rev the calculator, load the pocket protector and adjust your glasses; the Nerds are back with a vengeance! Together for the first time in one prodigious package, all four Nerds classics are ready for war with an armory of brand-new special featured! Included in this collection are the all-new Revenge Of The Nerds: Panty Raid Edition, Nerds II and the DVD premieres of Nerds III and IV! For everyone who's ever been picked on, made fun of or shoved down, the Revenge Of The Nerds Atomic Wedgie Collection is the ultimate in retaliatory comedy!

In this hilarious classic, a group of misfits decides to start their own fraternity after being rejected by every house on campus. But when the football jocks try to crush their nerd counterparts, a battle royale erupts between brains and brawn and the nerds devise the perfect plan to gain the upper hand.

Everyone's favorite nerds are headed to Ft. Lauderdale for a Frat Conference. But when the hotel manager and Alpha Betas join f-rces, the nerdy Tri-Lambs are left stranded in the dilapidated Hotel Coral Essex. Misled, mistreated and misused, the nerds once again strike back to deliver a lesson in respect you'll never forget!

Tri Lambda fraternity has finally become the most popular house on campus. But when the resident nerds discover an Alpha Beta plot to regain the title for the jocks, freshmen Harold and Ira are f-rced to call in all the legendary original nerds to protect more than just their pockets!

Booger's getting hitched and the nerds are ready to cut loose. But when nerd-o-phobes in the rich Republican family of Booger's fiancÃ©e try to cancel the wedding, it's up to the gang to prove once and for all that even nerds deserve respect... and that there just might be a little nerd in everyone!

Revenge Of The Nerds 2: Nerds In Paradise
Features Not Specified.

Revenge Of The Nerds 3: Next Generation
Features Not Specified.

Revenge Of The Nerds 4: Nerds In Love
The Nerd Surprise Theme Bachelor Party - Alternate Cut of the 3-D Scene

Review "Revenge Of The Nerds: The Atom"

Reviews for "Revenge Of The Nerds: The Atom"