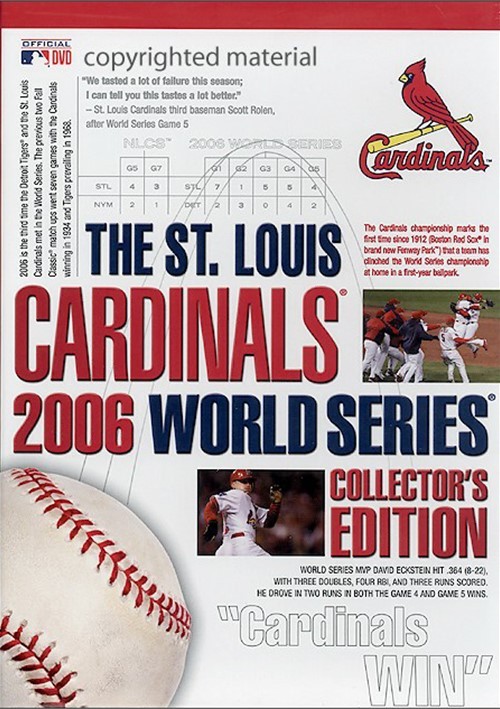 Powered by the red-clad, white-towel waving fan-base, the 2006 St. Louis Cardinals gave us an unparalleled rollercoaster of emotions that swelled to an improbable end as Busch Stadium staged an unforgettable celebration after the World Series Game 5 victory.

The St. Louis Cardinals stumbled toward the postseason and provided little indication of the magic to follow. Yet, after defeating the pitching-rich San Diego Padres in the NLDS, the underdog Cardinals stunned the New York Mets with a dramatic NLCS Game 7 capped by a 9th inning for the ages.

Every play, every crafted pitch, clutch hit, strategic maneuver, and historic performance of the 2006 World Series is preserved forever with this remarkable, one-of-a-kind DVD anthology. The complete game broadcast of the final two victories over the Mets and all five World Series games are in this collection, ready for your viewing pleasure. With more than 16 hours of game action and bonus footage, this DVD set will become the centerpiece of your Cardinals 2006 World Series library.

Your enjoyment is intensified with SleeveStats: the perfect companion to the ultimate baseball DVD experience, offering official stats, trivia, and game summaries right on each DVD's cover.

The complete NLCS Game 5 and Game 7 versus the New York Mets. All five World Series games against the Detroit Tigers.