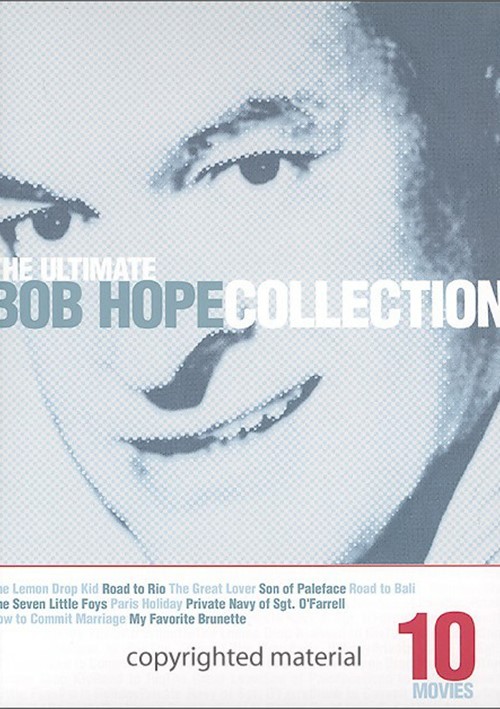 Thanks for the Memories.

Bob Hope stars as Sidney Melbourne, a conman who offers a friendly "sure thing" horse tip to the girlfriend of mobster Moose Moran at the race track. When the horse loses and Moose's original pick wins, Moose gives Sidney until Christmas to pay back the money he lost or his thug Sam the Surgeon will "open" Sidney after Christmas.

To avoid being charged with arson after burning down a circus, Hot Lips Barton (Bob Hope) and Scat Sweeney (Bing Crosby) stow away on an ocean bound ship. Aboard the vessel, the duo fall for Lucia Maria de Andrade (Dorothy Lamour), who is under the spell of her evil aunt (Gale Sondergaard), who has arranged a marriage for the young beauty.

Bob Hope stars as Freddie Hunter, a reporter who is chaperoning a troop of scouts aboard an exotic ocean liner. However, Freddie would rather pay more attention to Duchess Alexandria (Rhonda Fleming) than his scouts. But Freddie has more to be concerned with than his scouts and the Duchess, a homicidal gambler looking to frame him for his murderous deeds. But who will save Freddie from being the killer's next victim?

In this sequel to The Paleface, Bob Hope and Jane Russell return as the lead characters. Hope plays Junior Potter, who returns to claim his father's gold, which is nowhere to be found. Throw in Russell as "Mike", the luscious head of a gang of thieves, and Roy Rogers as a federal marshal hot on her trail.

Bob Hope and Bing Crosby star as two out-of-work vaudeville performers who are on the lam. The two are hired by a South Seas Prince as deep-sea divers in order to recover a buried treasure. They meet beautiful Princess Lala (Dorothy Lamour) and vie for her affections. Of course, the boys run into the usual perils.

Bob Hope plays real-life vaudeville star Eddie Foy, who had always performed as a "single" act on stage. But when his wife passes away, Foy must incorporate his seven children into the act in order to keep custody, but his adorable children are stealing his limelight until he realizes that his little terrors are worth their weight in gold.

Bob Hope plays Robert Hunter, an actor traveling to Paris to purchase a screenplay, only to find himself mixed up with counterfeits. While Hunter has his eye on diplomat Ann McCall (Martha Hyer), a sexy spy named Zara (Anita Ekberg), has her eye on the screenplay.

Bob Hope enlisted into the Navy as the title character in The Private Navy Of Sgt. O'Farrell. When a Japanese torpedo hits a cargo ship containing a shipment of beer, Sgt. O'Farrell decides to rescue the beverages and deliver some nurses to the outpost for his men. The troops, however, are more than surprised to receive several male nurses and Phyllis Diller!

Bob Hope and Oscar-winner Jane Wyman star as the perfect married couple with one minor exception... they are about to announce their divorce. However, their daughter is getting married. And that's just the beginning. The young couple must deal with the trials and tribulations of the groom's father (Jackie Gleason) as he tried to stop the wedding.

Ronnie Jackson (Bob Hope) is your average happy-go-lucky photographer. Naturally, Ronnie doesn't even think twice when he happily volunteers to take care of his neighbor's private-eye office. That is until a beautiful brunette walks into his office begging Ronnie to find her missing husband. Soon Ronnie finds himself on a wild goose chase that leads to murder.