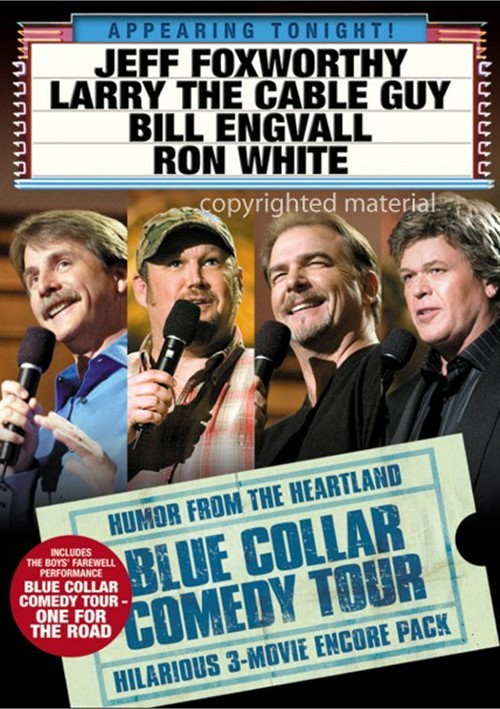 Home is where the humor is, thanks to over five hours of sidesplitting, gut-busting fun starring four of America's most beloved comics.

For the first time ever, all three Blue Collar Comedy Tour movies are together in one sensational set - including the Blue Collar boys' farewell performance - One For The Road.

Join Jeff Foxworthy, Larry the Cable Guy, Bill Engvall and Ron White for a triple shot of family entertainment. No matter where you're from, if you love to laugh, this 3-pack's for you.

Celebrated comedians Jeff Foxworthy, Larry the Cable Guy, Bill Engvall, and Ron White are reunited by popular demand to bring back more of their blue collar humor. The first movie was a runaway hit and the latest installment of this concert experience allows you to once again see them perform their original material on stage, up close and personal, from the best seat in the house.

In addition to a brand-new encore, you will get a look at the guys hanging out on their tour bus and performing the original song "Blue Collar Boys Ride Again." You'll see the guys just being themselves and interacting with their fans. So sit back, relax, and enjoy the fun-loving and raucous Blue Collar Crew.

After all these years together, the Blue Collar boys have gotten together one last time to give you one for the road.

Jeff Foxworthy, Larry the Cable Guy, Bill Engvall and Ron White have reunited for more of their hilarious blue collar humor. The first two movies were runaway hits, and this last installment of their concert experience features all-new material from these four legendary comedians.

The show was filmed at the historic Warner Theater in Washington, D.C. with a brand-new show-stopping encore. DVD extras include a freewheeling question-and-answer session with the comedians and an energetic group of college students, exclusive backstage footage, along with some of their usual fun-loving escapades including a wild encounter at the White House!

So sit right down - you've got the best seat in the house for this final ride with your favorite Blue Collar boys.