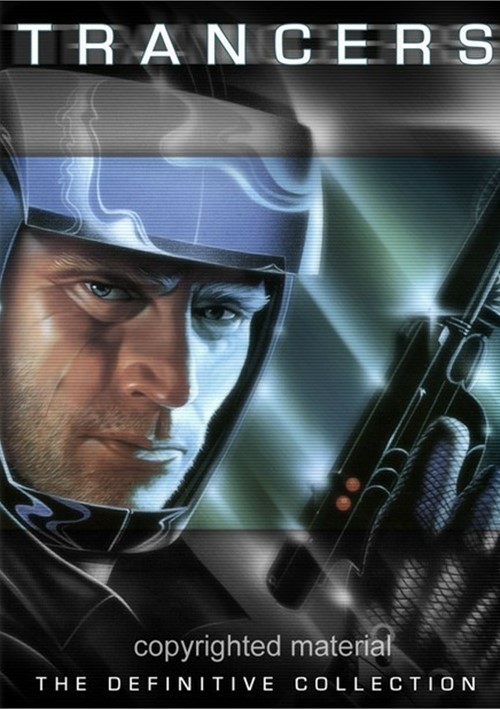 For the first time ever, the entire Trancers saga in one collection. Enter Angel City in the year 2247 AD, meet Jack Deth and prepare for adventure beyond your time... and his.

Brimming with enough adventure to fill 5 centuries Trancers 1-5 will take you beyond the limits of time and adventure.

Welcome to Angel City, 2247. Trooper Jack Deth is wiping out the last disciples of Whistler, who used his psychic power to 'trance' those with inferior minds, f-rcing them to follow his every desire. Though he'd been thought dead, he's very much alive... in the year 1985.

Whistler's master plan - kill all the ancestors of the City Council. With the Council disbanded, nothing can stop him from controlling the city. And that's where Deth comes in. Jack is sent back in time, inhabiting the body of his ancestor. Just one problem: Whistler's ancestor is a police detective, and he's trancing people in 1985. With the help of a strong-minded punk rock girl, Lena, he must find and protect Hap Ashby, a former baseball pitcher now living on Skid Row, and confront Whistler. The Trancers saga begins.

Los Angeles, 1991. Jack Deth has gotten used to life with his wife, Lena, in the six years since they killed Whistler. Hap has made quite a fortune investing, which he uses to finance his collection of fire trucks, among other things. But life is about to become difficult for Jack. Whistler's brother, E.D. Wardo, has gone back in time and created a 'trancer farm' under the organization known as GreenWorld. GreenWorld strives to 'clean up the world', but they are kidnapping homeless people and mental patients to become 'tranced'. And now they're after Hap, the ancestor of a future Council Member. Jack's ready to singe a few trancers, but he isn't expecting his dead wife, Alice, to show up. Through the power of technology, Alice has been saved from death and sent back to 1991 to help Jack stop Wardo. The tension mounts as Lena becomes more fearful of the thought of Jack leaving her for another woman. Hap slips back into his alcoholic habits to deal with the stress, and Jack realizes when Alice returns to the future, she'll die. Somehow, Jack must find a way to save more than just his future.

Jack, beginning to get his life back together, is time jacked back to 2247 to save Angel City from a new wave of trancers. His mission - find the origin of this new wave of trancers and end it with extreme prejudice. With the help of Lena and R.J., a trancer camp escapee, Jack learns that the new trancer program is government sponsored, and that his usual shoot-everything-that-moves attitude might not work this time.

With R.J. and Shark, a crystal powered cyborg, Deth will have to find a way inside the trancer program and shut it down. For good.

Jack is back to the future. Having since lost Lena, he finds he's lost his other wife Alice to Harris. While heading out for another assignment, something goes wrong with the TCL chamber. Jack finds himself in a whole new, more dangerous dimension. He also runs across a different version of trancers. These creeps control this new planet and Jack agrees to assist a rebel group known as the "Tunnel Rats" to crush the rule of the evil Lord Caliban.

After all, Jack has nothing but time to kill.

Welcome Jack back for another round with the trancers; he must find his way home from the other-dimensional world of Orpheus, where magic works and the trancers are the ruling.

However, Jack's quest to find the mystical Tiamond in the Castle of Unrelenting Terror may be thwarted by the return of Caliban, king of the Trancers and once thought dead.

Witness the explosive conclusion to the Trancers saga. Or is it?

Reviews for "Trancers: The Definitive Colle"