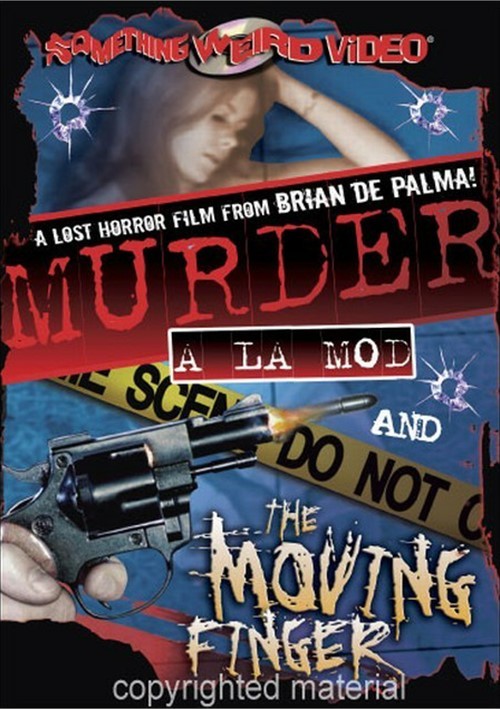 Lost horror from Brian De Palma! Love-starved Karen is startled to learn that her boyfriend Christopher earns a living making nudie movies with a creep named Otto (the always odd William Finley). Believing Christopher is only in the skinflick scene to make enough money to divorce his wife, Karen steals some cash for him but, while attempting to deliver it, is attacked by Otto and his ice pick...

To reveal more would spoil things except to note that Murder a la Mod culminates in a surprisingly gory murder that not only echoes Psycho but anticipates snuff films as well. Brian De Palma's directorial debut is a witty, bloody, funny, cynical and downright nasty little gem that, until now, has remained maddeningly impossible to see since its theatrical release in 1968 (where it played a single New York theater). Full of the same gritty vibe as his Greetings and Sisters, Murder a la Mod is De Palma at his most De Mented!

Plus: $90,000 in stolen cash shakes up a bunch of grubby bohemians when they discover a wounded bank robber hiding in the basement of a beatnik coffee house run by a phony poet (gravelly-voiced Lionel Stander) in The Moving Finger, a theatrically unreleased art house/exploitation film about Greenwich Village lowlifes that perfectly captures the hazy twilight of the Fifties beat scene: "The bus tourists are in! Start looking decadent!"

Take a lesson in how to photograph naked gals - and feel your brain cells melt in the process - when bare breasts, cowboys & Indians, stock footage and godawaful jokes collide in a lengthy excerpt from the never-before-released 1996 experimental-nudie-cutie An Eye For The Girls!

Reviews for "Murder A La Mod / The Moving F"