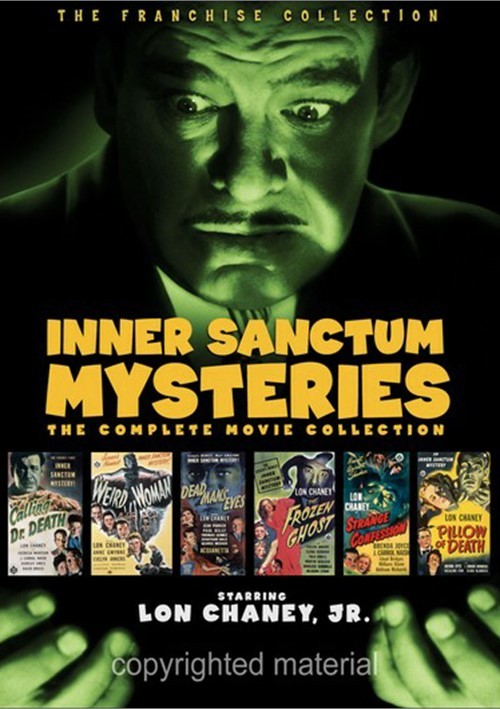 Get ready for unlimited thrills and chills as all six of Universal's classic Inner Sanctum Mysteries come to DVD for the first time ever. You'll have a hauntingly good time with horror icon Lon Chaney, Jr., as he gives timeless performances in these spooky feature-length films: Calling Dr. Death, Weird Woman, Dead Man's Eyes, The Frozen Ghost, Strange Confession and Pillow of Death. Based on the popular radio shows of the 1940's, this collectible set is a must-own for every classic mystery and horror fan. Death, dementia, dark arts...it's just another day in the forbidding and fascinating world of the Inner Sanctum!

Calling Dr. Death (1943): A distraught doctor is tormented by voices in his head that are urging him to end his unhappy marriage - forever.

Weird Woman (1944): Sorcery and superstition take a walk down the aisle when a professor marries a woman raised in the jungle by voodoo witchcraft practitioners and then dismisses her ominous warnings.

Dead Man's Eyes (1944): When an artist loses his sight in a freak accident, his future father-in-law promises to bequeath his own eyes upon his death - which ends up being much, much sooner than anyone could foresee.

The Frozen Ghost (1945): Things are certainly not what they seem when a hypnotist takes refuge in the spectacular mansion of a female friend who made her money from a creepy wax museum.

Strange Confession (1945): A brilliant chemist with the key to the cure for influenza is f-rce to take drastic measures when his greedy boss prematurely releases the unfinished drug to the public.

Pillow of Death (1945): A psychopathic killer is on the loose, so the eccentric and wealthy Kincaid family calls in a psychic investigator to put an end to the mysterious murders haunting their household.