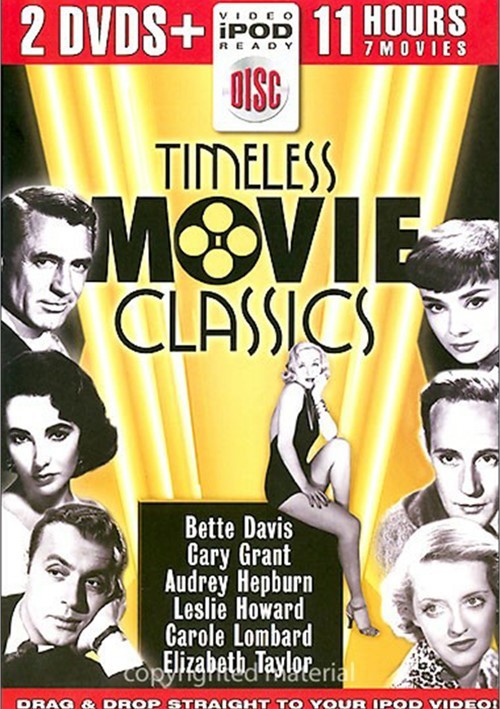 Includes 2 DVDs plus a Video iPod Ready Disc - Just drag and drop straight to your iPod Video! Movies include:

Reggie (Audrey Hepburn) finds her husband dead and a gang of crooks searching for a fortune which they're convinced she is hiding. Cary Grant comes to her aid, but as one crook after another is murdered, Hepburn finds it hard to distinguish the good guys from the bad. (Color, 113 min.)

William Powell earned his third OscarÂ® nomination for the role of Clarence Day, the cantankerous paterfamilias of a redheaded clan. Based on a hit Broadway comedy, it was one of the top box-office draws of 1947, earned four OscarÂ® nominations, and features the charm of young Elizabeth Taylor and Irene Dunne. (Color, 118 min.)

Michel Marnet (Charles Boyer) asks true love Terry McKay (Irene Dunne) for some time to prove himself worthy of her. They plan to meet in six months at the top of the Empire State Building, but a heart-breaking accident keep Terry away, threatening to keep the lovers apart forever. (B&W, 89 min.)

Esther Blodgett is just another starry-eyed farm girl trying to break into the movies. While working as a waitress at a Hollywood party, she catches the eye of alcoholic star Norman Maine and is later given a screen test. From there she's caught up in the Hollywood glamour machine. She and her idol Norman marry...but his career abruptly dwindles to nothing as hers takes off. (Color, 111 min.)

The obsessive love held by Philip (Leslie Howard) for a self-centered, Cockney waitress (Bette Davis) will undo his chances at happiness, unless he can escape their bond. Bette Davis' performance was such a standout that when the Motion Picture Academy failed to nominate her for an OscarÂ® the ensuing outcry led to the creation of a write-in option on that year's ballot. (B&W, 83 min.)

Stanley Banks is just recovering from his daughters wedding when he learns she is going to have a baby. He is strongly opposed at first, and disputes arise between two sets of grandparents. (B&W, 82 min.)

To redeem himself after a hoax, reporter Wallace Cook proposes a series of stories on doomed Hazel Flagg. Hazel discovers she really doesn't have radium poisoning, but still accepts a big fling in New York that Cook offers her. At first, she has a great time, but complications arise when she and Wally fall in love, and a German specialist discovers that Hazel is faking. (Color, 75 min.)

Reviews for "Timeless Movie Classics (with "