Beyond The Valley Of The Dolls 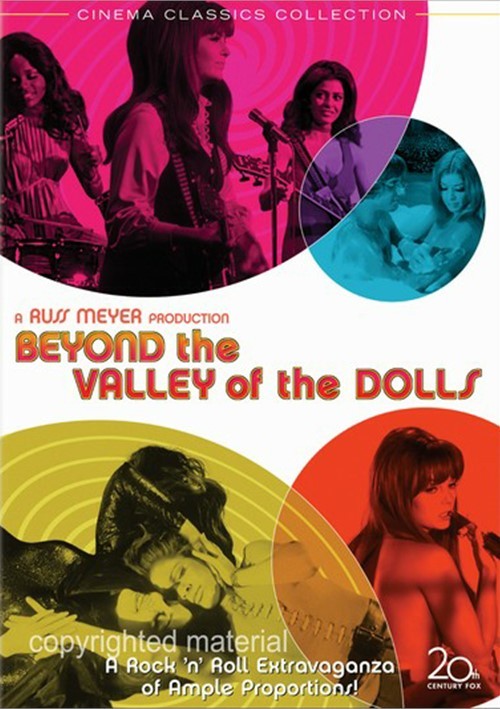 Step into a delirious kaleidoscope of the psychedelic '60s in this "hilarious" (L.A. Herald-Examiner) and "lusty" (Playboy) parody of the 1967 hit film Valley of the Dolls. Directed by auteur filmmaker Russ Meyer (Faster, Pussycat! Kill! Kill!) and written by fledgling film critic Roger Ebert, this wildly sexy cult classic "spoofs, celebrates and derides the swinging culture all at once" (Village Voice).

Fun-loving bombshells Kelly, Casey and Pet have a rock band, and they're headed to Hollywood to make it big. Thanks to Kelly's well-connected aunt, they soon find themselves at a hedonistic love-in thrown by eccentric music promoter Ronnie "Z-Man" Barzell. He takes them under his wing, and a new world of sex, drugs and rock 'n' roll unfolds. Superstardom is within reach, if only their newfound distractions don't get in the way!

Audio Commentary By Roger Ebert, Film Critic And Screenwriter Of Beyond The Valley Of The Dolls
Audio Commentary By Cast Members Dolly Reed, Cynthia Myers, Harrison Page, John La Zar and Erica Gavin
Above, Beneath and Beyond The Valley: The Making Of A Musical-Horror-Sex-Comedy
Look On Up At The Bottom: The Music Of The Dolls
The Best Of Beyond Featurette
Sex, Drugs, Music & Murder: Signs Of The Time, Baby! Featurette
Casey & Roxanne: The Love Scene Featurette

Review "Beyond The Valley Of The Dolls"

Reviews for "Beyond The Valley Of The Dolls"