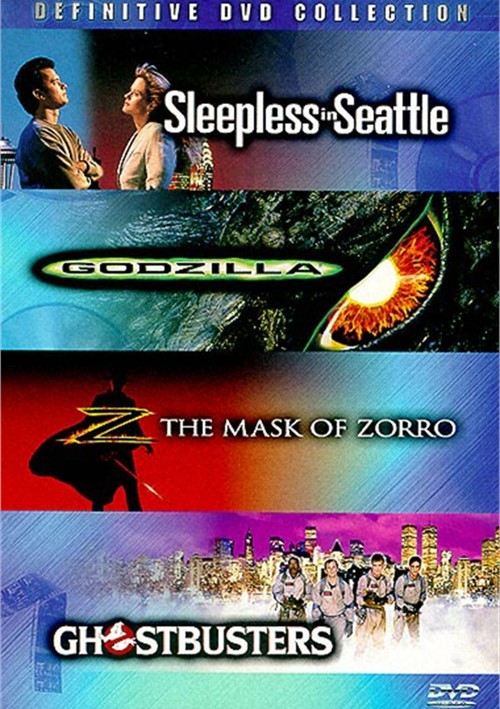 Sl--pless in Seattle - Godzilla - The Mask of Zorro - Ghostbusters

Hanks stars as Sam Baldwin, a widowed father who, thanks to the wiles of his worried son, becomes a reluctant guest on a radio call-in show. He's an instant hit with thousands of female listener, who deluge his Seattle home with letters of comfort. Meanwhile, inspired in equal parts by Sam's story and by classic Hollywood romance, writer Annie Reed (Ryan) becomes convinced that it's her destiny to meet Sam. There are just two problems: Annie's engaged to someone else, and Sam doesn't' know - yet - that they're made for each other. Co-starring Rosie O'Donnell, Rita Wilson and Rob Reiner, Sl--pless in Seattle is "absolutely enchanting...one of the year's most completely enjoyable motion pictures" Michael Medved, Sneak Previews.

"Godzilla" is back, bigger and much better than ever...its size defies comprehension...an expertly designed theme park ride of a movie that packs nonstop thrills...one jaw-dropping scene after another, the film never loses either momentum or its human scale." - Kevin Thomas, Los Angeles Times

The Mask of Zorro

The original Zorro, Don Diego de la Vega, is captured and imprisoned just as Spain concedes California to Santa Anna. 20 years go by and his mortal enemy, Don Rafael Montero, returns to California with a plan to become wealthy at the expense of the peasants.

We're Ready To Believe You.

Bill Murray, Dan Aykroyd and Harold Ramis star in this supernatural comedy classic that will have you howling! When the University downsizes the parapsychology department, Doctors Venkman (Murray), Stantz (Aykroyd) and Spengler (Ramis) make the leap from scientists to Ghostbusters, investigators and exterminators of paranormal pests! The bewitching Dana Barrett (Sigourney Weaver) discovers her refrigerator has become a portal into the spiritual dimension, our heroes then come face to face with an ancient evil f-rce with plans to raise hell in Manhattan!!