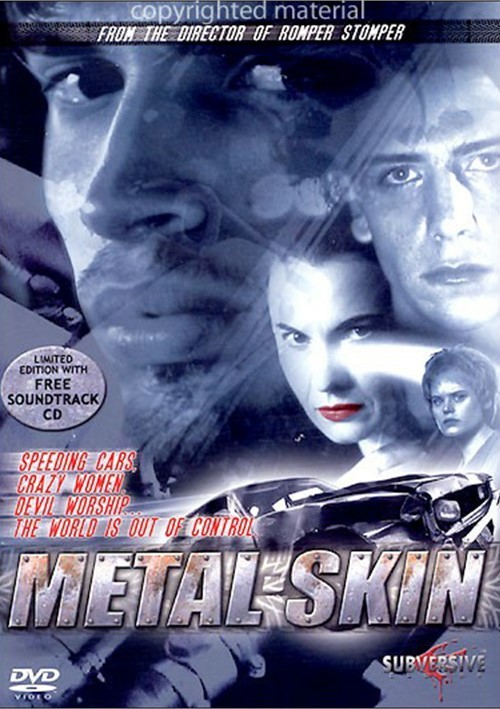 Put your helmets on, because the petal is to the metal in Geoffrey Wright's pulse-pounding, fast-paced film. Parked firmly on its wheels next to George Miller's Mad Max/Road Warrior movies, Metal Skin is a true testament that the Australians know how to make the best racing movies in the world.

Petrol-head Joe (Aden Young) babysits his brain-damaged "Pop" without a friend in the world, living in squalor in the Melbourne suburbs. But Joe does love one thing: fast cars! Securing employment at the local Westbarn Wholesalers, Joe meets his idol and best mate, Dazey (Ben Mendelsohn, The New World). Soon after, Joe falls in love with Savina (Tara Morice, Baz Luhrmann's Strictly Ballroom and Moulin Rouge), his goth co-worker who spends her spare time practicing black magic. Unfortunately, Savina has secretly fallen for Dazey, and will do anything to get him-including using Joe's feelings for her.

In true Shakespearian fashion, the couples race down the road to tragedy, building up to a climatic racing showdown so masterfully crafted that it rivals the most famous driving scenes in cinema. Forget watered-down Hollywood trash like The Fast And The Furious and Days Of Thunder-with an Australian punk soundtrack, rapid editing style, and a hot collection of the best young actors in Australia, director Geoffrey Wright follows his worldwide hit Romper Stomper (the film that introduced actor Russell Crow to the world) with a hard-edged masterpiece that leaves the competition waiting at the starting line.

Featurette with Cast and Crew