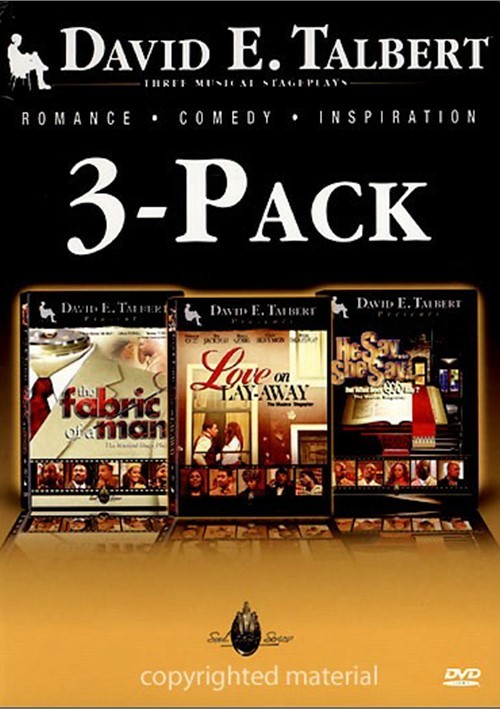 The Fabric of a Man

David E. Talbert's The Fabric of a Man is a jewel in the Talbert crown of romantic musical stage plays. It's the story of Dominique Majors (Tammy Townsend), an up-and-coming fashion designer in love with Blair Godfrey (Clifton Powell), a self-centered stockbroker who wishes she'd focus less on her career and more on him. One night Dominique stumbles into an old-school dry cleaner, where she meets Joshua King (Darren DeWitt Henson), a good-looking young tailor who takes interest in more than just her dry cleaning. Torn between the comfort of finance and the potential of new romance, Dominique is f-rced to decide which fabric of which man best suits her. It's your front row ticket to inspirational theatre at its best!

He Say, She Say, But What Does God Say?

David E. Talbert's He Say, She Say, But What Does God Say? is a revolution in inspirational theatre. Skillfully walking the fine line between faith and fear, this dynamic play tells the story of the hapless congregants of True Vines, a small, store-front church nestled in one of Detroit's roughest neighborhoods. The church-goers find themselves located next door to the Twenty Grand, a seedy nightclub laced with hustlers, murderers and gangsters. The action never stops as both vow to own the block and rid the community of each other. This play chronicles an all-out war between God-fearing people and gangsters who fear no one.

David E. Talbert's Love on Lay-Away is a wildly inventive, laugh-out-loud journey inside the lives of three couples living in a Philadelphia neighborhood. First, there's Ms. Willanetta (Cassi Davis), who after a life-changing religious experience, no longer wants to have relations with her suitor of twelve years, Renzo (Buddy Lewis). Next, there's Epiphany (Joi Campbell), a single mother who has yet to decide who will be the man in her life, her new boyfriend Reggie (Chico Benymon) or her six-year-old son, Man Man. Finally, there's Monique Graham (Deborah Cox), who feels as if her relationship with live-in boyfriend Anthony (Mel Jackson) is on layaway and he's making the absolute lowest monthly payments.

He Say, She Say, But What Does God Say?
Feature Commentary with Writer/Director David E. Talbert and Musical Director Robbie Lewis
Documentary on The Making Of He Say, She Say

Love On Lay-Away
Feature Commentary with Writer/Director David E. Talbert
Documentary on The Making Of The Fabric Of A Manc