Good Neighbors: The Complete Series 4 Plus The Royal Command Performance 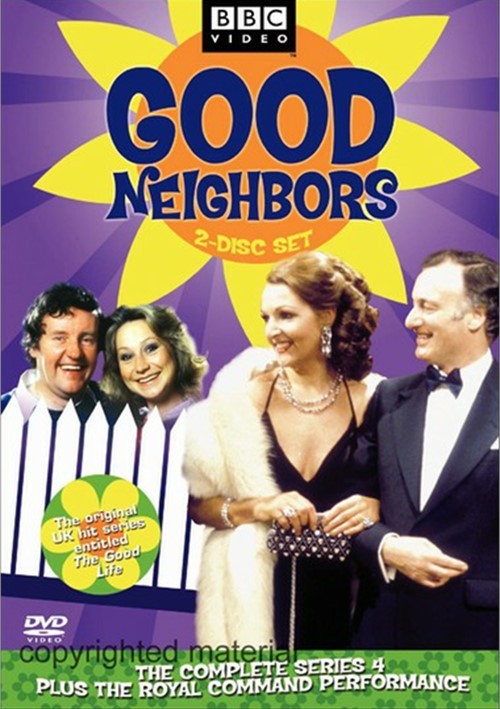 Self-sufficiency? In suburbia? You must be joking!

Good Neighbors is considered one of Britain's finest sitcoms by critics and audiences on both sides of the Atlantic, counting among its fans none other than the Queen herself. This set contains all newly restored episodes of the entire fourth series as well as the 1978 Royal Command Performance.

When Tom Good decided to give up the rat race to try his hand at self-sufficiency, no one was more surprised than his snobbish friends next door, Jerry and Margo Leadbetter. But Tom's wife, Barbara, eagerly joined him in his crusade, and soon pigs and chickens became the newest residents of stuffy Surbiton. By the fourth series, Tom and Barbara seem to be getting the hang of their new lifestyle, while Margo and Jerry may finally begin facing the fact that the goat and vegetable plot are here to stay.

Away From It All

The Goods go on holiday in Mayfair, leaving the Leadbetters in charge of their house and garden.

Is Margo having an affair?

Margo buys a spinning wheel and Tom buys a loom so he and Barbara can weave their own clothes.

The Goods put their loom to good use while Jerry battles to succeed "Sir."

Tom schemes about oil, Jerry schemes about the directorship, and Margo holds to her morals concerning a play she considers smutty.

The Goods celebrate two years since they went self-sufficient.